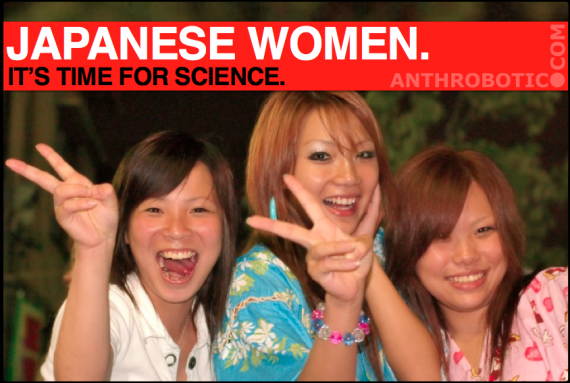 Japan’s Shrinking Population is a Big Problem… Science It!
Since Anthrobotic’s love of Japan-related social and technological statistics is (probably) not broadly shared among the 7-8 regular readers, we’re going to go ahead and speed right past all the whys and just drop these three nuggets of info:

A. Statistically, about 1.2 children are born to each Japanese woman.
A rate of 2 is necessary for population stasis.

B. A post-war and post-post-war baby boom means contemporary Japan is full of elderly
people. They are aging, need care for a long while, and eventually they will pass.

Japan’s in a deep demographic debacle, and both keeping women out of science AND getting more women into science present some sticky existential quandaries. What to do, what to do? Well, there is an answer, and like many things sociological, while obvious, it just doesn’t make sense until someone points at it and says:
“Hey, hey YOU! Look at this and understand why it’s this way and fixit STAT!“

While not included in the discussion, that’s what specifically social sciences do – give context and face to the parts of human life than seem obvious when, or rather, if one actually takes a moment to think about them; it’s the art and science of pointing out the glaringly obvious that never gets proper noticed.
And once you do, it’s like having magic info.

Sociology is basically straight-faced stand-up comedy without the comedy.

So, Anthrobotic’s Chief Maintenance Engineer did some stand-up sociology on the issue of Japan’s big-ass population problem and how sciencey J-girls can, no – MUST help fix it. It’s over at Akihabara News, and you are commanded to read it. Because for every person who reads this far and doesn’t click through, a J-Girl will shed a tear.

And then throw a dorky, meaningless peace sign.
And okay yeah, likely she’ll look good doing it.
Because of the Out of Cultural Context pass.

Ohhh, you see that?
That right there was sociology, son!