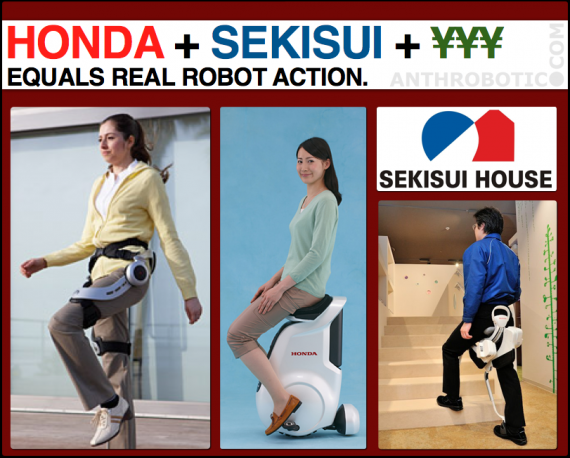 Here’s the Story, of Corporate Giants, Both Working in Two Very Different Fields
A few weeks back they announced a budding romance over the robots Honda makes, and the homes into which Sekisui House wants to put them. Unrelated, but simultaneous, the Japanese government announced an expansion in funding toward low-cost assistive robotics for the elderly and disabled – and they’re looking to promote insurance practices amenable to robot-related healthcare. Here’s the screenplay, very roughly translated:

J-Gov: Hey, you guys like, you know, wants some Yens?
Honda & Sekisui: Yeah, let us know when we can get a taste.

The Big Deal:
Honda does not build houses.
Sekisui House does not build robots.
Yet they are massaging a cross-technology romance.
And the J-government is ready to start spreading robot cash (this year).

Japan’s Taking Robot Action:
Honda, Sekisui House, and New Government Funding
You are commanded to jump on over to Akihabara News and see why Anthrobotic.com’s barely trained WordPress gorilla thinks this kinda corporate crossover at a time when there’s robot money to spend is kinda unprecedented and really promising for making with the robots already.