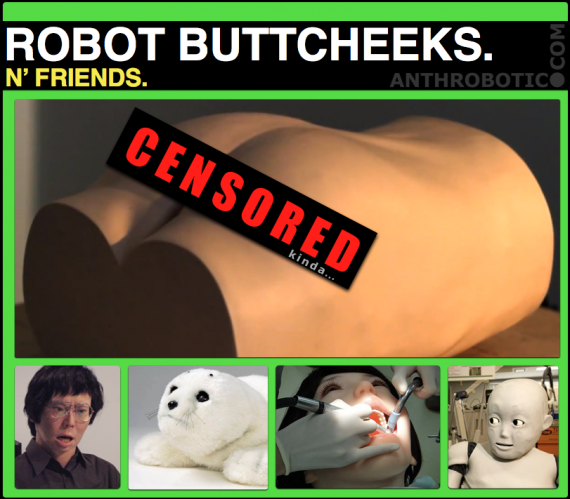 Yeah, You Like that?
Okay butt seriously, while it’s actually an awesome, progressive, unique, and very necessary bit of of robotics research, the SHIRI robot ass project is pure & uncut adolescent butt-joke crack cocaine to the 16 year-old boy piloting the 30-something progressively rotting meatsack in charge at Anthrobotic.com.
It’s like, not even fair, man…

Robotic Japanese Buttcheeks.
Notice how those three words don’t seem at all out of place with each other? Just sayin. Now, “shiri” basically means “butt” in Japanese. To paraphrase a brilliant, stunningly handsome, shockingly self-deluded keyboard pounder over at Akihabara News:
“Imagine if this project came from an English-speaking lab, and they just called it “BUTT.” That would probably be among the greatest things to ever happen in robotics.”
Dude said something like that, anyway.

Butt Goddammit, the Hilarity of Robot Buttcheeks isn’t the Point Here!
The point is that while it’s 500% justified to make fun of a stimuli-responsive robotic ass or other similarly disarming J-robots, far too often those of us doing the coverage neglect to circle back around and present the actual merits and practical applications of the seemingly weird, hilarious, or creepy. Most of the time, robots that initially seem pointless or grandiose of self-indulgent are actually just really, really advanced or insidiously practical. Butt the thing is, we just don’t know it yet – and a lot of bonehead tech writers don’t go much further beyond nailing down a trite, lame-ass pun for their headline (don’t scroll up), and then filling in a few paragraphs with crass innuendo (don’t re-read).

SHIRI is a great example, because once the cackling dies down and one has a few sober thoughts, one will realize that the super-advanced androids and humanoids of the future are in fact going to need buttcheeks. Since nobody else is making them, SHIRI creator Nobuhiro Takahashi, while perhaps a bit of a strange bird, is actually a visionary genius who’s going to get filthy rich selling robotic asses around the world.

“Okay – go ahead, laugh it up. Ha, ha, ha. Butt I make the best artificial buttcheeks on the planet. NOW PAY ME.”
…he might say.

Anyway, jump on over to AkihabaraNews.com and have a read:
Japan’s Creepiest Robots (and why they’re not)
Robot ass isn’t the only topic covered, promise.

Even though it totally could be.