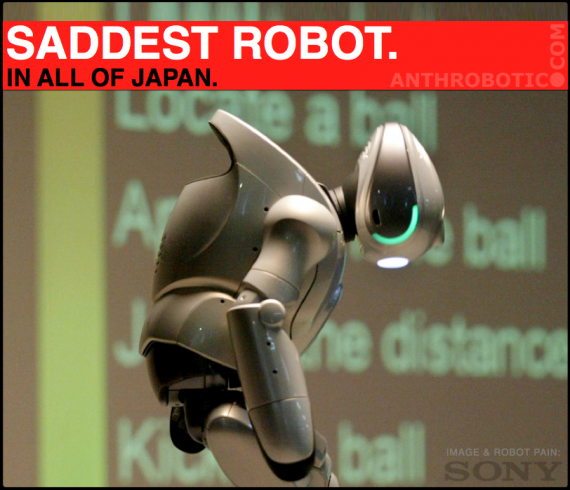 Look at What You’ve Done, Sony. LOOK AT IT!
Ahhh how nice, yet totally not, to live in one’s own bubble reality. Sony is somehow convinced that the world wants, oh let’s see… how about 73 versions of the VAIO computers (some great ideas for PCs, unfortunately implemented with technological schizophrenia), and let’s go ahead and plop out another PlayStation Portable (which appeals to maybe a few thousand dorks around the world and the ever-shrinking 6-12 year-old Japanese boy demographic).

...you know what you're doing.

QRIO & AIBO: Victims of the Bubble
Had they not given up on it, an upscaled Sony QRIO (pictured above, crying bitter robot tears) would quite likely be advanced enough to compete in the upcoming DARPA Robotics Challenge, and maybe even win. But NOOOOOOO, they had to cancel the program and the super-tech doggybot AIBO (the most advanced & best-selling consumer robot ever) all to save money and refocus on… junk. We do know exactly what the cancellations did to help the company: NOTTAGODDAMNTHING.

In January of 2006, Two of the world’s best robotics projects (ever) were canceled, and Sony just burrowed deeper into its blanket of obliviousness. For shame.

Sony, You Should Fret, But Not Too Hard – Redemption Can Be Yours
Over at Akihabara News, Anthrobotic’s chief blah blah blaher breaks down the whole saga, does a little bit more of the making fun of Sony, and since the company’s executive board and top R&D nerds are rabid consumers of Anthrobotic content and that of its proxies, provides step-by-step advice on how the tech giant can to stop being obtuse and get back to being awesome. Have a read!

The Saddest Robots in Japan Live Among the Sins of Sony