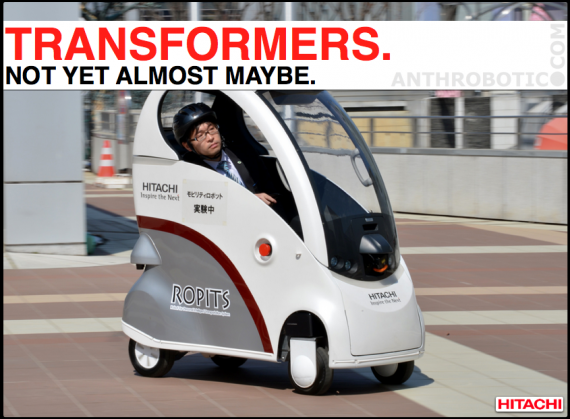 Seriously, They’re Going to Get Cooler. Promise.
Not that Hitachi’s Robot for Personal Intelligent Transport System (Ropits) isn’t kinda cool for what it is (a climb-inside, touch your destination on the map, have a snooze while it takes you there on the sidewalks and byways kinda transport vehicle for the elderly or disabled), it’s just that fantastic CGI and sci-fi pushes our expectations to unreasonable levels and junk and stuff. In other words, robot cars are awesome, but at the moment our proverbial -fi is pretty far ahead of our sci-. But hey, probably not for long, yo – not for long.

Then again, technology is a fluid, evolving, recursive social force in and of itself, and human imagination, our -fi, really never stops pushing and dreaming, so some years down the road when then-present sci- catches up with the -fi of now and we can all shop for robomobilies, the then-future contemporary -fi will have already matriculated onward toward dreams of human transport that will require even better sci-. Another way to say that is: humans are both imaginative and greedy, and when we finally get robot cars we’ll probably be all like “Meh, meh, meh, it’s such a pain to walk to the car. I want a transporter like Star Trek.“

It’s pretty much guaranteed that a time will come when we’ll all complain about our robot cars like we now complain about our smartphones (as if they actually did exist just a few years ago – they didn’t!). Toward such, Japan and its American and European counterparts are keeping a good pace and pushing automation and roboticization for the cars of tomorrow. Or the cars of three weeks from now. Or next December. Or whenever – when I finally buy a boat. Doesn’t “the _____ of tomorrow” seem really shortsighted?

Moving along, Japanese society actually has some unique reasons & motivations to make cars into robots. So do the right thing, and leap on over to AkihabaraNews.com to have a read: Japan’s Robot Cars: Where’s this Road Going?

And Yes, This is More Shamless(ful?) Cross-Self-Promotion
But not really, because if one has no shame, one can one be neither shameless nor shameful – which is convenient! As has been  previously mentioned, Anthrobotic’s chief keyboard pounder is philandering with AkihabaraNews.com. Anthrobotic’s kinda covering that work with some blah blah blah about the same stuff here because over there one’s not allowed to say “shit” and stuff like that and given the much wider reach of that publication the Anthrobotical tendency to push out ridiculous run-on sentences and cryptic dork-speak just probably wouldn’t fly well. But it must come out. It must.

And you just read it.
Thanks, man! 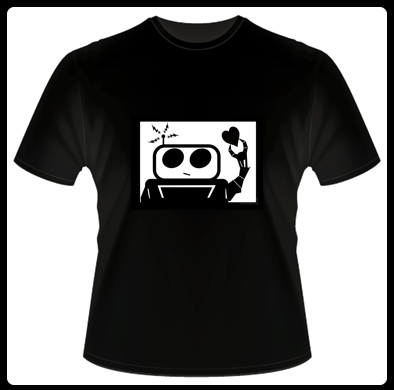