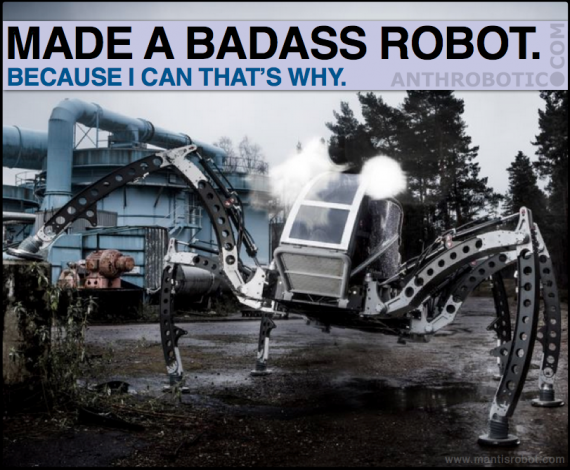 A Thing of Beauty
Winchester, U.K. gentleman Matt Denton, creator of the fantastic six-legged Mantis robot, has been in the media a lot this month. Particularly interesting is the piece over at Akihabara News (no shame!). But he’s also getting a lot of rather condescending pats the head – as if to say:

“Oh look at your cute robot, that’s nice. Too bad it doesn’t really do anything.“

Or the equally common, not-so-veiled dismissal of:

“Wow Sally, that’s some crazy weird stuff, how is it NOT from Japan, what with all their weirdo robot stuff?? Okay whatever then, you don’t care about science, so moving on to celebrity cellulite gossip, overly dramatic fear reporting, and pretend outrage at someone’s boobie falling out – or who cares really, just pump along to the ridiculous techno soundtrack – you’re our audience and we’re pretty sure you’re lobotomized and we’ll serve up endless croutons of idiocy to sprinkle on your dumbass salad – stay tuned!“

Formula:
Pile on hyperbole, give a gee-whiz and a shrug, maybe some general specs regurgitation.
Do it this way, provide no substance, and: BOOM – you’re a writer! …and a clone.

Now, there is actually some decent coverage out there – Gizmag has a very respectable, brief write-up, and Akihabara News really does it justice (still no shame!). Certainly not everyone has to go long form on this stuff, but the flippant and flimsy coverage – damn one hates the term – of the mainstream media, what’s that doing but dumbing down, trivializing, and marketing audiences away from respectable and responsible science coverage?

Okay, not to be overly dramatic about it, but… NO, wait – this is the perfect amount of drama! The bulk of big-media science coverage sucks, and so shame and a low-level infectious disease, or just like diarrhea or something, upon the half-assed keyboard pounders who blithely glance at amazingly cool sciencey stuff, excrete a few pandering, dust-flavored one-liners, dismiss the work as wacky, and move on with almost no celebration or mention of the unprecedented engineering, computer science, and creativity that, for one example amongst many, went into Mr. Denton’s project.

If a pseudo-journalist with a rounded corners-obsessed all-black digital bullhorn infected with chronic run-on sentence herpes, with at best 8 regular readers, if even that dude can call B.S. on your investigative skill and integrity, then you gotta know that your reporting is just like, you know, weak sauce, man.

But There’s a Party for Robot Science at Akihabara News!
Matt Denton spent four years building the Mantis, it’s a masterpiece and is already 200% worthy of the Robot Hall of Fame. Dude just wanted to make a cool robot and inspire others to do the same – and he nailed it. So in yet another volley of shame-neutral self-promotion, Anthrobotic recommends its Fake Reporter in Chief’s breakdown vis-a-viś Kogoro Kurata’s Kuratas mech robot – last year’s standout Just-Because-It’s-Awesome-and-Just-Because-I-Can robotics project.

Jump through & have a read. Science for the sake of science is goddamn great. 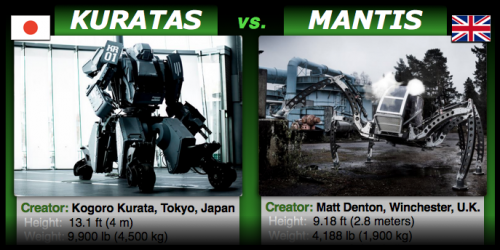 CLICKY THROUGH FOR FULL BREAKDOWN

Sony Was Awesome at Robots; Not So Much With Reality
READ MORE