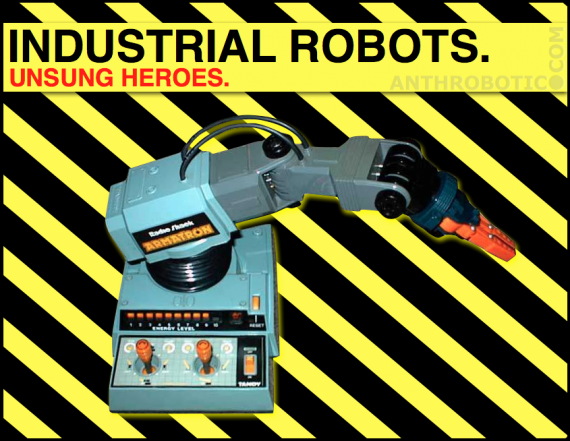 Robots Welding, Machining, Painting, and Drilling – Sexier than You Imagine
No, no really! As a matter of fact, there are some interesting historical and social issues behind Japan’s industrial robotics story. And it kinda serves up a metaphorical smack-down to all the technological conservatives crying about how increasingly capable robotic labor is going to bring the sky down on what remains of the human labor force. As the handsome, creative, funny, and entirely self-deluded author of the linked piece says:
“The thing is, jobs change form. The rise of PCs, for example, it didn’t eliminate, but rather evolved office work.”

And don’t even start with that “Oh, well what about Japan’s struggling economy” crap. You know who refers to the world’s 3rd/2nd-largest-economy-depending-on-how-you-measure as “struggling?” Unreasonably growth-obsessed economists and the morons who repeat what they say – that’s who. Have a visit to Japan. It’s like the richest, safest place on earth. It has a massive, dominant, affluent middle class. It has almost no ultra-poor or ultra-rich. Almost all national debt is publicly held (as opposed to the America-China ouroboros situation thingy). Does Japan experience breakneck economic growth year to year? No – but come on now – sure, you gotta love some capitalism, but you gotta have some reasonable context as well, son.

Anywho, a plurality of the world’s industrial robots are located in Japan, and it’s become a perfect example of how robots replaced a human labor force and then the humans got different, better, safer jobs, and all the naysaying anti-robo-automation economists from the 60s & 70s got season passes to the All-Crow Buffet in heaven.
(Rita, do you think people will get that?)

Okay Now Go Read the Whole Thing
So yeah, Anthrobotic.com’s founder, CEO, admiral/janitor continues contributing at Akihabara News, and this piece on Japan’s industrial robotics situation is actually like 10 days old so it’s kinda embarrassing to just now be informing the 7-9 regular readers, but hey… well, nothing. If you didn’t catch the announcement via Facebook, jump on over:
Japan’s Industrial Robotics Situation: it’s Interesting. Seriously!
[AKIHABARANEWS.COM]

Lastly, an Important Question:
Is Armitron really the only toy inspired by industrial robots?
If you the reader are aware of more – please feed some comments.
___

3D Printing, the Invigoration of Industrial Robotics, and China Gets a Bit Nervous
READ MORE