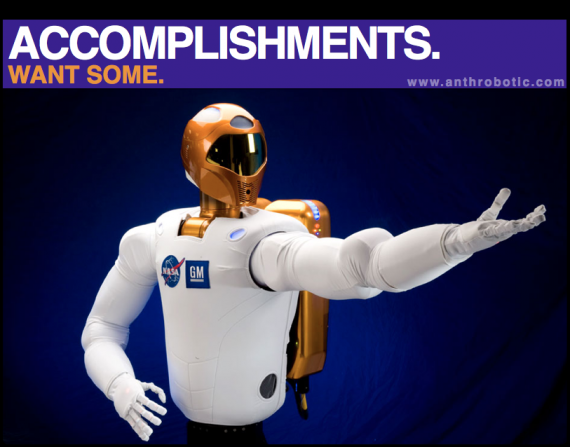 (UPDATE: R2 has come to life! See Anthrobotic’s follow-up here.)
You might Have Heard about the Robot on Mars…
After 7.5 months of foreplay, a Nuclear-Powered Science Robot Dune Buggy with Lasers arrived at Mars and gave the whole world a pretty respectable nergasm (ongoing coverage). Because, an autonomous rocket sky crane just delivered to Mars a 2000lb nuclear-powered geology lab on wheels!

You're welcome, all of humanity.

But what’s up with NASA’s other Robots?

Like, for Example, What is Robotnaut 2 Doing these Days?
Unlike Curiosity, it’s not easy to find a lot of new news on Robotnaut 2 (R2). After STS-133’s February 2011 delivery, the handsome and sleek and high-tech NASA/General Motors collaboration has kept a pretty low profile. Perhaps we should rename the machine “Modesty.” Or, given that rovers are a helluva lot easier to engineer than functional humanoids, maybe that’s a little unfair. How about something like… “Reality!”

“R2 got its first taste of real work on Wednesday.”

But see, there is no mention of exactly which Wednesday. Or year. One guesses it was probably a Wednesday in 2012. And we’ve covered about 27 of those so far. So umm… Anybody home? R2’s been there for a year and half – what is he DOING and WHEN is it being done? We all want to know!

For a foolishly inspired moment, it seemed that this novel approach made sense:
“Hey, why not put R2 on top of Curiosity! That would be awesome!”

Alas, in the immortal words of Harry Stamper, to NASA:
“You’re the guys that’re thinking shit up! I’m sure you got a team of men sitting
around somewhere right now just thinking shit up and somebody backing them up!”
So, yeah – they’d already covered that. And named it “Centaur 2.”
Which somehow seems both hilarious and, you know, right.

The thing is this: the humanoid Robonaut 2 really looks the proverbial robot part, and this gives the machine an appeal that reaches way past the standard robotic manipulator arms and interplanetary trowels, and perhaps that artificially raises expectations. In the above-mentioned press release, R2’s task was the not at all dramatic or harrowing operation of an ISS airflow monitor; the robot’s ability to hold perfectly still and not breathe makes it a ninja at such tasks. You’d like to think a multi-million dollar humanoid robot in space could find better work, but it seems they haven’t yet thought that shit up.

Probably rightfully so, it’s small steps. For now, R2 is just hanging out, Tweeting, and waiting for the next trial or task – rumor is it could be this month.

Curiosity is ferociously inspiring and and fabulously interesting, but now that’s it’s safe on Mars, let’s also get R2 some time in the spotlight, yeah NASA?

ADDENDUM:
R2’s Competition and the Space Torso Love Triangle
By the way, while R2 is the only assistive humanoid robot actually in space, he isn’t the only player. The mildly KIRFy* Russian SAR-400 (coverage at Plastic Pals) and the German feminized-just-because(?) AILA (coverage at FOX News) are both currently in development. Right here there should be a snide joke about robot romance, the American R2 wresting the Russian SAR-400 for the love of the German girl, and a renewed Cold War getting all hot in space. But Anthrobotic is way too serious for that kinda stuff.