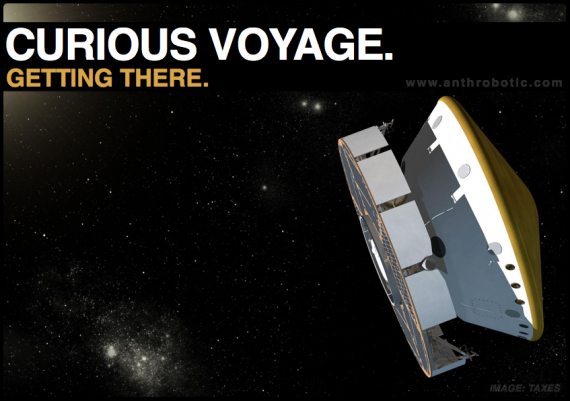 Now This is a Robot
As advocated here a few weeks back, remotely controlled Predator & Reaper drones and their fancy autopilot systems, for example, should not be called robots. On the very other hand, the Mars Science Laboratory (main site), AKA the Curiosity Rover, while also remotely controlled with some rather serious autonomous capabilities, is without doubt a state of the art, executive-class robot.

Still hammering out the “why” on that one… but anyway:

Curiosity as Unprecedented Technological Achievement
Mission planning, execution, and the machine itself are beautiful shining examples of humanity’s best minds at work with our most advanced technologies.
In all seriousness, there really is no exaggeration in the name
“Nuclear-Powered Science Robot Dune Buggy with Lasers.”
(Part 2 here!)

What we got here is an automatic radar landing system with hovering rocket sky-crane delivery, a big robot arm with a drill and a laser than really means business, an HD camera doing what cameras do, numerous environment & weather sensors, and a little chunk of plutonium running the entire show. Oh, and the whole package is commuting over five hundred million kilometers to the job site. Beautiful.

(To upgrade from the fawning, dorky commentary here to a much more sciency description of Curiosity’s technology, see NASA planetary scientist Michael Mischna’s Atlantic interview from earlier this month.)

Mars Rovers From Small to Much Bigger and Better
It’s been 9 years since Spirit and Opportunity, two 400lb. (181KG) solar-powered rovers less than 25% the size of Curiosity, left Earth for their Mars missions. They’ve been a great success and have remained in operation long beyond expectations; after functioning 25 times the length of its intended mission, Spirit finally went offline a few years back, and, incredibly, Opportunity is still at it.

And now, Curiosity, the most advanced robot ever to leave Earth, is coming to play. It would be challenge enough to get Curiosity to do science here at home, but getting a 2000lb. (907KG) nuclear-powered super-sensitive rover the size of a Mini Cooper to Mars, in one piece, and then have it go about its science and report back… well, the effort alone is monumental. Its success, with the quality and variety of data this lab on wheels collects, will be entirely profound.

Goodbye STS, Hello New Worlds
This is also a great time to continue with the obnoxious yet righteous cry of
“HA! LOOK AT THAT!!“ toward those at home and abroad who lamented or even celebrated last year’s retirement of the almost 40 year-old Shuttle program – as if that was some kinda harbinger of doom for the American space program. Whatever.

Already this year NASA has assisted a privately developed and funded re-supply module’s trip to the ISS (SpaceX), they’ll soon welcome a visit from Virgin Galactic, and they’re sending a plutonium-powered small car to Mars on a mission of super sexy science. Oh, and NASA’s pals at the Air Force have their various X-37 craft doing who knows what up in space for over a year at a time.

So…  Yeah. Perspective, man. Get some.

Curiosity about Curiosity: Part 1 of… Oh, I don’t know, 4 Maybe?
Anthrobotic is planning at least 4 parts covering events and developments.

For the non-soundtracked version with more
details and a few stirring moments of its own: