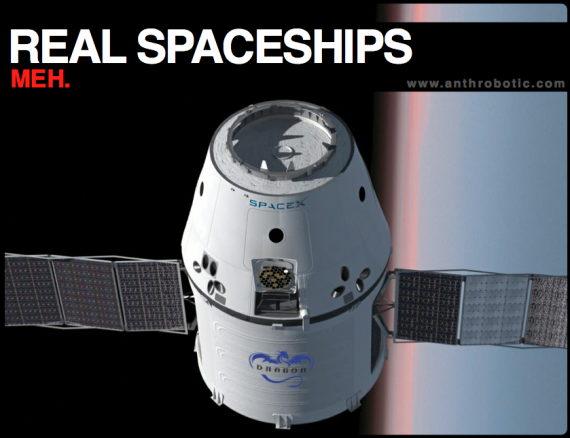 The Power of the Fi and the Sci
Dressed up in a Star Trek jumpsuit unitard thingy, Part-1 of this series detailed the very positive influence of sci-fi, e.g., Star Trek inspiring Martin Cooper’s cell phone sci, and in the inverse, scientists Sagan, Vinge, and Asimov cranking out the fi.

Nice – whoo hoo!
Look what that did:

But there’s another effect…

Toward the Federation Starship Enterprise
Well… not exactly. In fact, not even anywhere near a notion of thinking about maybe being approximately close to beginning the process of considering the vague possibility (unless you’re this guy – he has detailed plans). The Part-1 fun is over, and apropos to the conclusion of SpaceX’s historic achievement just days ago,
Anthrobotic welcomes you to Part-2 – the BAD.

“In many ways, the worst enemy of NASA is Star Trek.
Captain Picard says engage, and the ship moves.
And people think, how hard can this be?“
–Scott Pace, Formerly High-Up at NASA, All-Around Space Guy

While lame, Pace’s comment is actually right on: Star Trek, and fiction like it, distorts and unreasonably inflates our perceived capability for human space travel. Because think about it, doesn’t it really, really seem like we should be capable of more? But we aren’t making starships – hell, we aren’t even making spaceships – and I know what a spaceship looks like, because I’ve seen them all on TV.

Even in Space, Everything is a Remix. Well, Without Sound.
Okay, see the SpaceX Dragon capsule up top there? That thing is brand new. It’s amazing technology, and the entire venture is scientifically, socially, and economically beautiful; Elon Musk and his team deserve not only our respect and congratulations, but also that fatt NASA cargo delivery contract.

It’s also very, very nice to point and go “HA!” in the direction of those both foreign and domestic who derided or even celebrated last year’s retirement of the Space Shuttle and the surely-to-follow decline of America’s space program. Well, turns out we’re so awesome and sciency, the little stuff like cargo delivery – yeah, we got private companies for that now. So eat it.

See any private companies from Russia going to space?
Not a chance. Too busy making airplanes that crash in developing countries.

How about some private Chinese companies?
Oh, too soon! You could always bundle and stack peasants to make a space elevator!

There’s no wheat in space, China.

Okay, anyway – we can all agree on one thing:
The SpaceX project is awesome.

But guess what else!
It’s also very illustrative of the dark side of side sci-fi’s influence. 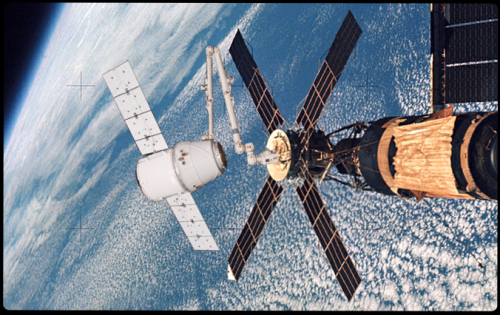 In the above frame from last week’s Dragon capsule rendezvous with the International Space Station, there is something very, very out of place. A casual viewer might actually see nothing at all, but that fact is exactly what’s out of place.

Imagine your’re not someone who’d read a dorktastic technology website, just an everyday taxpayer who has a smartphone but doesn’t really understand how it works. Doesn’t look like anything’s wrong with this image, right?

That’s totally the Dragon linking up with a space station.
But it’s the Skylab science tube from about 35 years ago.

Okay, okay, not a real frame, and a terrible Photoshop, but aside from the 70s’ browns, aren’t these the same soup cans we’ve got up there now? And what about the capsule, aside from it being shinier and not finished in earth tones, the design is completely appropriate for either 1969 or 1974 or 2012.

See, SpaceX’s achievements are awesome, but they are far from unprecedented, in fact they’ve been precedented for like 40 years! So, aside from the PayPal money, how is the Dragon any better than the command module from the Apollo program?

Reasonably Jaded Short Answer: It’s totally not.
As space stuff goes, fi has brought us better and better concepts.
But sci seems to be treading water.

Now, we do have the DARPA/NASA 100-year starship project, run by someone who, no surprise here, was inspired by Star Trek, and we’ve got Virgin Galactic and their rocket airplanes for tourists, and we’ve got Planetary Resources and their aspirations (which go well beyond mining, but still – rockets).

Among those efforts, does anything really capture the imagination of the general public? We’ve been at the whole space thing for nearly 60 years, and still we have rockets and capsules, but no spaceships. It’s all a bit frustrating, so let’s have a catharsis:

Warped Expectations Shattered, and Sample Emotional Response:
::START::
Space science guys & gals, both public and private, what the hell are you doing? Seriously, you should fire yourselves from life. Your spaceships SUCK. My iPhone could power 10 Apollo programs simultaneously, and the best you jerk-offs can do is a goddamn capsule with a 50 year-old design that does almost EXACTLY what those things were doing 50 years ago. At best this is de-evolution.

WHAT THE HELL IS GOING ON HERE??

So, please tell me – 50 years later – why do we still have giant phalluses launching space suppositories into orbit so they can dock with the ISS Disappointing where strangely unhealthy-looking astronauts drink tang, grow mold in zero-g, look out the window, and get their salad tossed on a daily basis by the space toilet?

WHERE IS MY GODDAMN SPACESHIP??

And don’t give me the lack of funding crap. Want more money? Then why don’t you guys do something inspiring? Why don’t you upstage the sci-fi for once? Show us something fantastic and we’ll show you the cash!

Seriously. We went the moon.

It was 51 years ago when JFK said “We’re totally going,” and we went, in this:

And then, two weeks ago, we went to space in this:

So when we see this:

…over and over again.
And we know that we can’t have it.
Well, that’s some disappointing stuff right there.
How can we appropriate any more cash for you guys?
How can we encourage in our children a love of space stuff?

Okay, back in realityland, it’s obvious that space travel & transit is the least developed/manifested/realized area of the sci-fi genre, or, perhaps more appropriately, that of science fantasy.

Anyone with even a passing interest in science and technology knows that space travel is really hard, and the faster & further you want to go, the harder it gets. But, we also know that human beings don’t do well with the the word “impossible.” It’s like an invitation to a potentially epic touchdown dance. In, you know, space. But that’s probably a long, long way off. We’ll likely be post-human near-immortal superbeings by the time decent space travel is possible.

So what about the now? What can be done?

The Information Economy Demands Better PR, and Looks Matter
People loved the Space Shuttle because even though it was just a fancy orbiter in space, and a hitchhiking glider in atmosphere, and somewhat impractical in many ways, it looked like a ship. You have to wonder how many kids who fell in love with the Space Shuttle are now in some way or another working in the aerospace industry. And you have to appreciate how many politicians supported the program because of the simple pride of having the world’s first and only spaceship.

The visual matters, and if the technology-obsessed blowhard at Anthrobotic feels this way about the issue, then how does the average citizen see it? What is there to be inspired by? You could play some HD footage of just about any spaceflight since they began, including the SpaceX thingy, and the consuming public would be justified in sorta shrugging, losing interest, and changing the channel.

Know who sucks at PR? Government.
Who’s fabulous at it? Private Companies.

So NASA, thanks for all the fish.
Private companies, make with the spaceships.
And then in the post-economic utopia, well, you know. 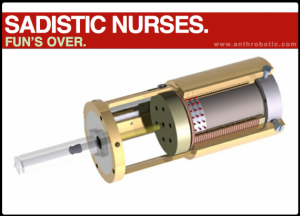