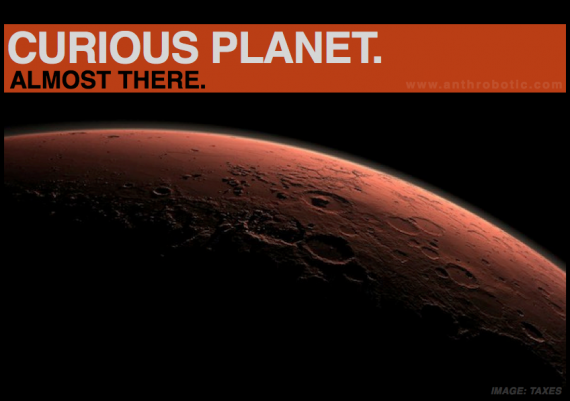 Seven Minutes of Terror Just a Few Days Away!
Well! The Mars Science Laboratory, or, if you prefer, the Curiosity Rover, or, a name lovingly sanctioned by Anthrobotic, the Nuclear-Powered Science Robot Dune Buggy with Lasers is quickly approaching its destination (follow at NASA’s MSL home).

Without question, or much room for hyperbole, this is the most advanced off-planet unmanned mission in human history. It’s going to do a bunch of geology, get some HD photos, go for lots of drives, fire lasers at rocks & stuff. It’s going to be awesome.

Those who aren’t up to speed: first, be ashamed; second, find redemption by getting yourself hip with Curiosity about Curiosity, Part 1 (resources plus technosnark).

And here, watch the Seven Minutes of Terror video.
And, see the complete landing and initial operation animation.
Do it again. And here’s some homework for the weekend:

There’s a free Mars Rover Landing game for XBox Live, so if you got one – don’t sleep! Practice over the weekend, see if you can beat an autonomously landing machine with your oh-so-special human consciousness!

MOBILE: Get the App!

Snatch up the Be a Martian app for iPhone & Android & Windows Phone.

Dismay the Naysayers!
Probably should stop beating on this one soon, but realize that thus far only 3 of the 7 rovers sent to Mars have been successful: Sojourner, Spirit, and Opportunity. And that’s NASA, NASA, and NASA. Number 4, Curiosity, the best thingy ever sent to another planet, is almost up to bat. Anyone still lamenting or celebrating the decline of the American space program, please rub your brain cells together a little harder.

Or, for those who feel it’s a waste of cash,
keep those neurons warm and have a read:
–Long-Term Economic Benefits of the Apollo Program
–Dr. Ernst Stuhlinger’s Letter to an African Nun: Why Explore Space?

Monday, August 5th, 2012
A Beautiful Day to be a Human
Rightly so, nobody believes that the U.S. space program operates purely on an altruistic, innate human love of exploration and education. Governments, being the complex animals they are, will always have secondary and tertiary motives.

But, as we stab out into space, it’s foolish and cruel to believe that our optimism, hope, and Curiosity are not the primary and most powerful motivations (see what I did there?).

For now, we’re stuck here on Earth. But the super-tech rover Curiosity, when it starts running around on Mars doing science stuff, will be a proxy for humanity’s purest idealism. Hopefully it’s also our forerunner.

Remember, this is Curiosity about Curiosity, Part 2 of 4.
Check out the drooling asskissery of Part 1, and stay tuned for 3 & 4!