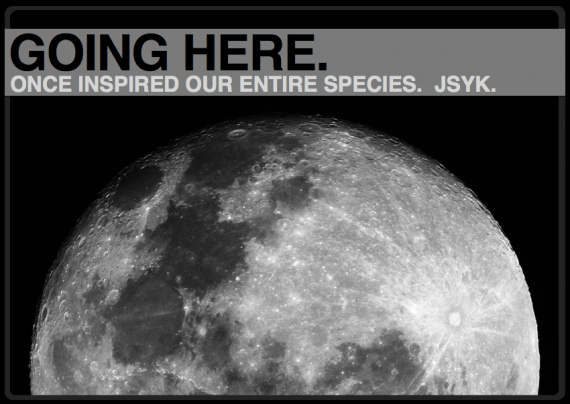 No Props for Me, But…
I’ve so been talking about this for years. About the need for a grand-space-program-national-project-thingy to be applied like a blowtorch & kerosene to the psyche of my nation and reignite the corpsified American Dream.

Because as a nation, what do we really have to unite and inspire us right now? If you have an answer for that question, well you’re totally DELUDED and WRONG! Or at least mostly. Sorry.

Want an example? Well, it’s been argued, quite convincingly I might add,* that last year’s dorktarded iPhone 5 anticipation was really just Americans having nothing else, you know, going on. Nothing big to drive their hopes and dreams, nothing to encourage the study of science & technology & maths, nothing to demonstrate on a grand scale the value and payoff of hard work on big projects.
*Oh, that was me.

That’s why a shiny new mobile computer gets us all hot and bothered.
Weak.

We Gotta Do Better.
With all due respect to NASA and other space agencies around the world, the international space station is really awesome, and I love the technology, but we’ve had interconnected solar-powered tubes in orbit now for a long, long time. And the Space Shuttle was a revelation – in 1985. Its merciful euthanasia was long overdue.

We know well the budgetary constraints NASA and its overseas counterparts have faced throughout their history – all while doing the amazing. We know it, but we’ve done nothing for it. Why haven’t we pushed for more and through our representatives demanded that necessary resources be provided for doing a bunch more supercool space stuff?

Doesn’t anyone other than Richard Branson (British) & Elon Musk (South African) have the juice to get this ball rolling? (by the way, those two make a pretty goddamn good argument for immigration reform)

What if someone could play all the necessary political games?
Who could muster the full power of the U.S. behind a bold new space endeavor? 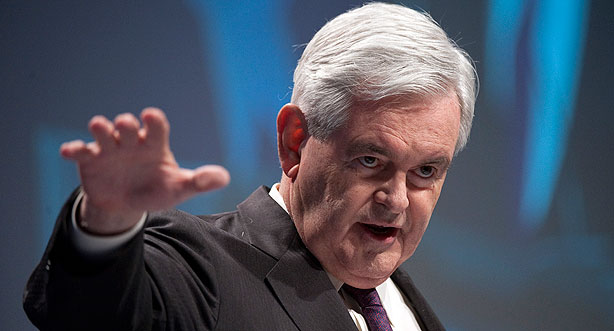 Have You Heard this One?
Newt Gingrich Walks into a Press Conference…
…and drops the best idea I’ve heard come out of a politician’s mouth in decades (simultaneously realized that I’m now old enough to remember decades of politicians – unsettling). Anyway, while not entirely unexpected in Florida, it was still… just the strangest breath of fresh air. An immensely powerful political figure was saying “Hey, let’s do something big. In space. On the moon. It’s going to be awesome. By 2020 we’ll have lunar golf and low-gravity Olympics and stuff.”
Yes. Please.

Now here’s the clear air: I am giving some props here, but Newt Gingrich is just as scandalous and seedy and filthy as any given politician. I’d also be remiss not to mention that, in the video below, Gingrich bitches about what if, over all these decades, NASA’s budget had been given to private companies – because that would have somehow magically made space all kinds of accessible and developed and awesome because government is bad and private companies would have done so much better.

Here’s the thing: I know Newt already knows this.
So for those who buy what he’s selling, ask yourself this:
“Who manufactured the Space Shuttle?”

Was it the USPS? FDA? DHS? NASA?
No, stupid – it was Boeing and Lockheed and Rockwell.
I have a strong feeling those are not government agencies.
Apollo was a government-led cooperation with the private sector.
And it worked beautifully for the benefit of all humanity.
And NASA has done exactly that ever since.
On a relatively tiny budget.

See, what I’m saying here is that – Newt’s full of shit, man.

Getting off point – suffice it to say, not a Newt Gingrich fan, nor of politics and its practitioners in general. But when the tubby man said what he said, I think any honest technology dork out there has to admit that they felt, if but momentarily, a sincere tingle of hope.

And the Commentary
Now, Neil deGrasse Tyson, a top contender for becoming the 21st century Carl Sagan (though a bit too pessimistic to really nail it), says the 2020 timeline might be overly optimistic, but a moon base is not outside the realm of relatively immediate possibility. Here’s a brief interview from MSNBC:

[YouTube Here for Apple Mobile Products]
So it’s expensive. So what? Hundreds of billions? Big deal.
How much did the invasion and occupation of Iraq cost? Definitely more than a trillion dollars – and what did that do for us? JACK SHIT, that’s what.

Guess what NASA’s budget has been for it’s in entire history – about $790 billion. Over fifty goddamn years! What did that get for us? MASSIVE GAME-CHANGING ECONOMIC DEVELOPMENT, HUNDREDS OF THOUSANDS OF JOBS, AND THE RESPECT OF ALL HUMANITY. Here, have a look at the long-term returns on the Apollo program.

Not only can we do this, it’s almost immoral not to.
Newt is full of it, to be sure, but his idea is absolutely wonderful.
So let’s go ahead and send robots first to get the ball rolling, and we go later.
Yep, robots – which this more optimistic space expert guy has the sense to mention:

Okay? Just… Come on. Let’s do this.
We’ll lead – we’ve got the experience.
But let’s work with China.
And Japan.
Even Mexico has a space program.
¡Vamos a espacio conmigo!
Oh, and the European Union, too (though we may have to spot them some cash).

Here’s Where I Get All Misty-Eyed and Invalidate My Misanthropy
To be sure, we’ve got a million problems on the ground in the U.S. that also need attention, but a grand project of planetary proportion – another bold leap for mankind – could pull everything and everyone up.

Point is this:
The United States of America, with competent, motivated, and educated leadership combined with vision, a sense of adventure, and little bit of foolish optimism, could once again manifest the strength of its collective – once again demonstrate to the world, and remind ourselves, that a nation comprised of all human cultures and nationalities wields the immutable force of idealism, a pure sense of hope, and a power far more than the sum of its parts. Nearly half a century after Apollo, we could once again with powerful technology unite our citizens, revitalize our economy, reach the hearts and minds of billions, and inspire generations.

And get some sweet lunar real estate.

Newt Gingrich can’t be the only politician who sees this…

BOOKS RELATED TO THIS POST:
“Destination Moon,” by Rod Pyle
“Escaping the Bonds of Earth: The Fifties and the Sixties,” by Ben Evans 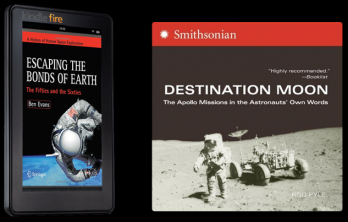 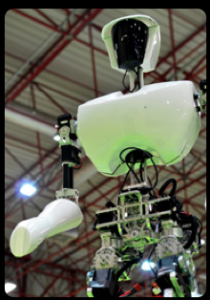