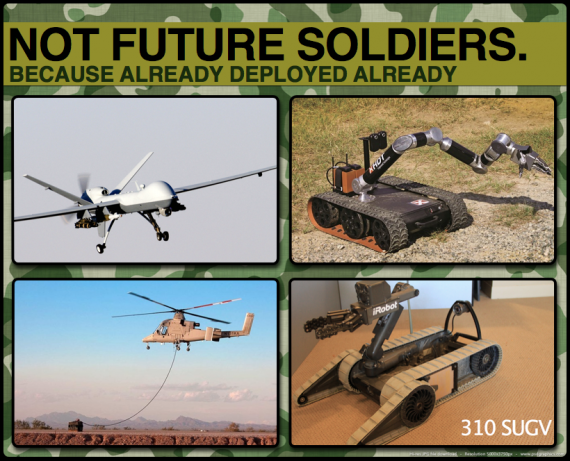 War as Technology
Obviously human warfare has essentially never been waged without use of the latest technologies – that’s a given. What’s fundamentally changing with contemporary technological advancement is the gradual robotic extension/augmentation/replacement of the individual soldier; a trend pointing to the eventual removal of the individual from the battlefield and the sky (and space).

Announced within the past 24 hours, the U.S. military is going to seriously cut ground forces (Army & Marines, particularly). The monkey pony show of politics calls it budget cuts and responsible spending and such, but they neglect to point out that it’s also because of those machines in the image above and their like – grunts are being obviated by bots, man.

WarBots All Over the News:
There’s a lot out there right now – lots to take in. Of course these developments come with a whole laundry list of ethical and philosophical and practical questions I’ll not address here – so go read/watch and make up your own mind.
First: Robot Wars, Al-Jazeera Fault Lines Special Report (VIDEO)
Then: New WarBot Dexterity, Forbes (ARTICLE BY ALEX KNAPP)
And: Real-Life War Machines, Gizmodo (ARTICLE & VIDEO)
Wrapping it Up: X37B Spaceplane Maybe Kinda Spying on China, BBC (ARTICLE)

BOOKS MENTIONED IN THIS POST:
“Wired for War”
by P.W. Singer