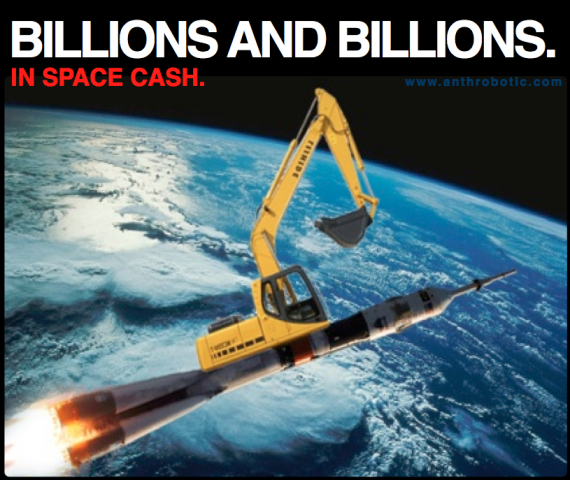 From Mining – Most Likely
That you’re dorky enough to be reading this means you’ve almost certainly heard about the pending announcement from Planetary Resources (empty site, JSYK). If not, here’s the thing: some really (I mean, really) big names with huge stacks of earth cash are backing this new company, and most of the speculation leans toward asteroid/space mining of some sort. Here’s a piece from Forbes, and another one from The Wall Street Journal.

Tomorrow, Tuesday, April 24, at some vague time in Seattle, they’re going to drop some knowledge – hopefully it will realistically backup the rather grandiose claims being been tossed around (trillions added to the U.S. economy, saving humanity, etc.).

Asteroid mining could be pretty cool. While extremely expensive, it’s actually feasible with today’s technology. If Planetary Resources has some novel means of doing so, or even if it’s just the announcement of a big sexy science project, that’s awesome. We need more of that. Jump to their site to sign up for news.

But Wait, What’s that You Say?
Asteroid Mining has Already Kinda Been Demonstrated in Principle?
With (mostly disingenuous) apologies for once again chastising real journalists, I must say it’s rather inexplicable that I, a dude who molests WordPress in order to yell about technology in public, I among very few am bringing up JAXA’s Hayabusa mission. (SEE ALSO: Anthrobotic.com’s exclusive mission photo). Neither of the above referenced pieces, for which real writers were assuredly paid real money, say a damn thing about it. The articles were otherwise okay, but come on.

Maybe it’s not such a big deal, but it is like, you know, humanity’s only example of successfully visiting and landing on an asteroid, and bringing back samples. Ever. Which would be like, oh, I don’t know… an exact analogue for space mining? The mission wasn’t perfect, but still. Come on!

I emailed one of the authors about this.
He didn’t reply. Here, you can drop them a line, too:
Brian Caulfield – Forbes [TWITTER]
Amir Efrati – WSJ [TWITTER]

I do have to give some props to Damon Poeter’s PC MAG piece. While he failed to make fun of the same WSJ & Forbes pieces for not doing so, he did mention the Hayabusa project in his reporting. Still, Mr. Poeter and I are largely alone on this island of… mentioning things really relevant and important about space mining stuff.

Of late I’ve been rather unkind to real writers, but come on, wouldn’t you get around to mentioning a precedent like that in 1,100 or so words? It’s odd, but whatever – maybe I know more than real journalists. Or, could be they had good reason to ignore the issue, and my arrogance knows no bounds.

I will definitely concede, however, that the bounds of my Photoshop skills are readily obvious. 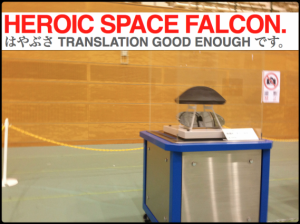