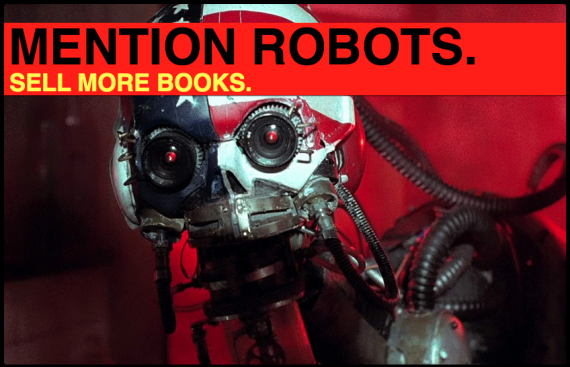 Robots in the Future are Coming to Take Your Job?
Oh No, Oh No!
Oh…  Not Really.
Okay, Maybe in China.
As my 6 regular readers know, I often go off on various angles of this issue. Have a look at the Technology & Labor category – one can see there’s certainly no shortage of hand-wringing, gee-whiz, and scare tactics. And why I think China’s economy is going to get hosed by robots.

One thing is for certain: putting “robot” in your title is shrewd marketing.

Two Futurists, Two Generations
Singularity Hub interviewed this younger guy Federico Pistono – talking about his upcoming book “Robots Will Steal Your Job, But That’s Okay,” which seems to be a commentary on our labor force’s pending inability to retrain itself, keep up with technological advancement, and manage/sustain continued growth (capitalism). Thereafter we get some riots and economic collapse. Hard to decipher where robots come into play – maybe just the marketing? Dude’s throwing out a healthy portion of pseudo-intellectual anti-capitalist hippy apocalypse babble, but while it might be somewhat myopic and one-sided it’s likely good perspective and food for thought. I wish him the greatest success with the book, but right now he sounds a lot deep in the danger of little information and little regard for the comprehensive, contextual, holistic nature of technological advancement.

Another position, recently unveiled at a TEDx appearance, is from older guy Thomas Frey. His bold proclamation is that by 2030, 18 years from now, 2 billion of the world’s jobs, that’s 50%, will have been lost. Frey lays out his 5 projections on areas of transformative advancement very soon to obviate current modes of employment, and he then proposes replacement jobs that will rapidly supplant that which was lost. Contrasting Pistono’s doom and gloom, Frey thinks we’re going to be okay, but there’s also an unsettling optimism in his words and bullet points. Are things REALLY going to change that fast in 18 years? And if they do, can humans really adapt so quickly? Maybe – I don’t know though. I dork out on the future all the goddamn time, and Frey’s timeline is challenging even for me.

Choose Humanity’s Adventure!
It makes me nervous when I realize I’m the moderate voice. I find it intriguing that the young guy says we’re doomed and headed for calamity, and the old guy says it’s all going to be cool. I’m concerned that both might have a have a limited perspective. A confab might be in order, because Frey is providing the panacea to Pistono’s hysteria which could possibly temper Frey’s optimism.
Ya dig?

While Frey is less so, they’re both pointing at one or two or five particularly awesome technological advancements, projecting consequences, and forgetting that every other field of human endeavor is ALSO moving forward. I think Frey ultimately wins this round, but he could also pump the breaks a little bit. There’s always context.

Consider the The Avatar Example:
130-some years from now, would we really use metal bullets, helicopters, ancient wheelchairs, almost no robots, no AI/NBI, and do our mining in the same way we do now – alongside technology that allows for interstellar travel and, you know, Avatars? Contemporary audiences can relate, and James Cameron gets paid – that’s his toolset – but it’s scientifically and realistically dumb as hell.

So yeah, these two make good sides on the issue – have a read, keep some context, and my guess is that you’ll actually understand the issue better than they do.

And on a somewhat related side note:
Yes, Robots Sell Books.
And Robots are Friends, They aren’t Coming to get Us or Our Jobs.
Or… I’m Totally Deluded.
Because here’s an old Wired piece about the first robot-on-human homicide. It happened in an auto factory among non-unionized robots, and (probably) was just an accident. However, in a bizarre twist, it was on the 58th anniversary of Capek’s R.U.R. premiere performance. So you see what I mean – ACCIDENT? Or the first subtle volley of A ROBOT UPRISING LONG IN THE PLANNING!

Oh, and that image of the robot up top – that’s from 1990’s “Hardware,” a strange and beautiful sci-fi movie about population control using, you guessed it, that robot.
I recommend watching Hardware. 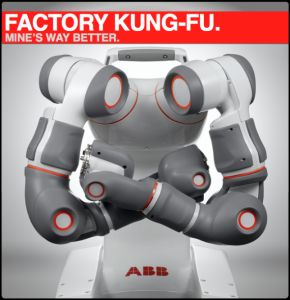 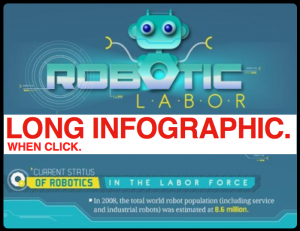 All Your Jobs Are Belong to Us.
READ MORE
Hello, China! Welcome to Capitalism. Ummm, You Might Not Like the Next Part…
ROM for Right & Wrong: Teaching Humans Vs. Coding Machines
WarBot Update: WarBots in the News, WarBots Here, There, Everywhere.
Leaping Across Mori’s Uncanny Valley: Androids Probably Won’t Creep Us Out
All Your Jobs Are Belong to Us.
February 14, 2012  Posted by anthrobotic at 1:23 PM AI, Artificial Intelligence, Future Already Very Pending, Here First or Best Here, Industrial Robots, Medical Robots, Military Robotics, NBI, Robot, Robot Art, Robot Emotions, Robot Love, Robots in Space, Technology, Technology & Labor, Technology & Work, The Beginning is Near