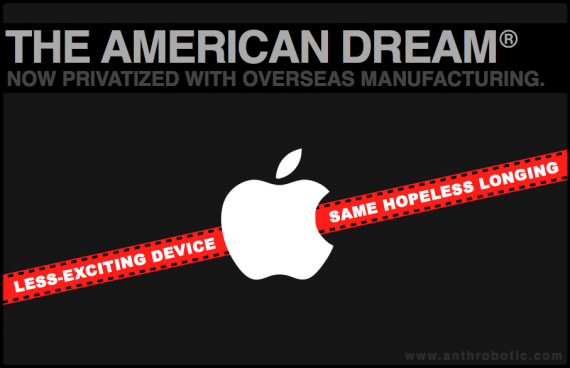 (This is a repost & redux from October 5, 2011 – the day before the suspected-to-be-iPhone 5 was released as the iPhone 4S. The fanboy drool and mainstream gee-whiz is considerably dialed down this time around (leaks, much?), but the sentiment is largely the same. Of course we did have the Nuclear-Powered Science Robot Dune Buggy with Lasers this year, and that was very big, but on a societal level we still have a sad hole in our technology hearts – and that’s what this blah blah blah is all about.

Now, this is a very American-centric/relative piece, so you know, context. Any hippies making “oh poor you and your First-World problems” comments will be mercilessly ridiculed and sent away to a Technology Dumbass Rehabilitation camp until they realize that the technological advances of developed countries, very much including the proliferation of mobile telecommunications, are exactly what keeps the developing world from collapsing into pre-industrial barbarism.
_______________

The Great Want
I was half-seriously saying to my friend Jason last night that waiting for the iPhone 5’s release is like waiting for Christmas morning when we were 10. Except that the reveal of this present will be more like “Here’s what we got you, but you can’t actually have it for another two to four weeks.” That part’s kinda cruel. He’s at 3G, I’m at 3GS – upgrade is ferociously justified (and cheap here in Japan). So, like lots and lots of Americans and other people around the world, we’ve been not so patiently waiting for Tuesday morning; we have also been part of this peculiar intensity.

Troubling Telecommunication Technolust
Can you think of any other product, across any and all areas of industry, for which a pending release has been the subject of such anticipation, such broad media coverage, and so much conjecture? And how is it that the key marketing strategy for a company’s flagship revenue source is their absolute refusal to talk about the product until after its launch? Do we consumers really want the new hotness that badly? How are all these strings being pulled? How can so many otherwise reasonable adults have so much longing for the iPhone 5?

Even if one’s not an iPhone user and has no plans to convert, chances are one is at least curious about what Apple’s got. I mean, be honest, even if you’ve got only a very general interest in technology, you’re going to be paying attention to the announcement. And if you’re not actively following the story, you’ll hear about it passively – it will be everywhere for a few days or a week or so.

So… what’s this all about?
It’s just a pretty new phone, right?

No.
We know that a phone hasn’t been just a phone for several years now, and a lot of us hardly use the telephone part of the device at all. And, they’ve become, well, you know – smart. This guy (Mike Elgan) and this woman (Amber Case) have developed theories suggesting that smartphones are actually highly personalized digital information prosthetics – and they literally makes us already cyborgs already (Anthrobotic nods in agreement). Smartphones connect us as individuals to the vast stream of human communication; they non-invasively inject the sum total of humanity’s information into the palm of our hands. Their elegantly rapid penetration into everyday life has been… (drama pause) profound. Ask organizers and participants in the Arab Spring. Ask villagers in developing countries who lack roads and electricity – but do have respectable data plans.

So yeah, it’s more than just a phone – as a practical tool, the iPhone 5 in particular will be an exciting addition to mobile communications and gaming and entertainment blah blah blah, and as per usual, Apple will probably introduce hardware and software features that will shape mobile technology on a global scale – that’s what Apple does.

And all that’s awesome whoo-hoo way to go.
But still, it’s not really THAT big of a deal.
Why the hell do we care so much?

A Manifestation of Deep-Seated Social-Psychological Phenomena
But Maybe Only if You’re an American
Perhaps counterintuitively, it seems that at the essential level all the iPhone 5 excitement and anticipation and media coverage and hyperbole actually has relatively little to do with shallow, mindless American consumerism. And I’m talking about the U.S. here because, for now and for better or worse, that’s where a plurality of the world’s techiest technology, money, productive creativity, and iPhone 5 media coverage and consumers are located.
Okay so… what then?

Now listen for the thud – here drops a cheesy armchaired macro-societal analysis:
Subconsciously – in my country – the rabid anticipation for the iPhone 5 is actually about hope, and by that I mean it’s about the American Dream. In a way.
Or the corpsification thereof. In a way.

Because, in these times, in the U.S., we have almost nothing else to be excited about.
(NOTE – 2012’s exception: Nuclear-Powered Science Robot Dune Buggy with Lasers)

We of the Uninspiring Slump
Fundamental to Anthrobotic’s silly-ass take on tech is the primary tenet of the
51%+ Positive Technological Utopianism Movement (that I totally just invented), which is: Technology is the fundamental precursor to civilization and is therefore the most powerful social force in the universe, yo. Srsly. And at the moment, humanity is in the midst of a rapid upswing in nearly all realms of human development. Things are just getting better, all across the board. BUT, there are still some crappy little downward notches in the larger upward curve. We’re in one of those – the American Dream has lost coherence – and we are desperate for something big, something to inspire and unite us, something more than, oh I don’t know, the impotent & mentally retarded discourse of America’s pathetic political charade, for example.

A leap too far? Overgeneralizing? Pandering to the Dumb? Just dumb?
Well, I suppose it’s possible that the population of the U.S. who find themselves anywhere on the mildly-curious-to-completely-rapt scale of interest in the iPhone 5’s pending release are a poor sample from which to gauge the attitude of a nation. But for that to be the case it would have to be in another universe with different rules.
Because A: There are around 310 million people in the U.S., and about 100 million are smartphone users, and I’d guess (and read survey data reporting) that a strong percentage of them are pretty interested in learning about or buying the iPhone 5 – so if you think such a massive population block that is engaged and ready to take action on an issue provides a poor statistical sample, well then, you can’t count.
And because B: those 100 million people have nothing else to give a shit about.

The iPhone 5, Insidiously Alluring in a Vacuum!
So what the hell am I saying here? Well, The iPhone is an incredible device that quite literally represents a truckload of previously impossible mobile functionality. Think about it – just 4.5 years ago it didn’t exist, and the App Store (which has been copied by, ummm…, everyone) is barely over 3 years old. It’s a beautifully designed tool, elegantly powerful in so many ways. But, it’s just a consumer product, and in another year, we’ll want the next version, and the next, and so on.

It’s just a thing – a product to be purchased. It is not a revolution nor a renaissance, it’s a very precedented technological artifact of late 2011. Certainly ideas always trump artifacts, but at the moment, we’re fresh out.

See, We’re Just Projecting
In the U.S., where traditional notions of culture are diffuse and diluted, we tend to instead unite around ideas and ideals – and very often those drive and/or are a product of scientific or technological advancement of some kind – and sometimes, that can inspire others around the world. The mass-production of automobiles and human flight inspired notions of the freedom of movement, TV launched and inspired vast visual creativity, and following the Soviet advances, the Apollo missions united the nation, gave new appreciation for the Pale Blue Dot, ROI-ed ten$ of billion$, and inspired the world to continue pushing into the frontier of space. And, American computer technology, much of it pioneered by Apple, jumpstarted what will probably be the single largest paradigm shift in the history of our species. It’s become natural for us to see great positivity and opportunity in our technological achievements.

So, Americans rightly appreciate and embrace innovation, we want look to the future with hope – we long for new ideas and new developments that create new economies and new possibilities. But for the time being now, our American Dream is stuck in neutral. We have no common rallying point.

The best thing Americans collectively have to look forward to is… Tim Cook, 10:00am, PST. Currently, our nation’s greatest point of unity and excitement and anticipation is for the release of another mobile telecommunications device.

Well That’s not so Uplifting Now, is it?
I think we desperately want good news, we desperately want a new great project stabbing toward some awesome goal – and there’s just… nothing there. The economy is crap, there is no great leader to inspire us, and there is no great undertaking for the betterment of all humankind. That’s where the iPhone 5 anticipation energy comes from. Americans want what is new, we want to push forward, we want profound ideas to inspire us now and for decades to come – and for a long while, we’ve had those things.

But, sadly, the iPhone 5 is all we got for now. If we were about to launch a manned mission to Mars, or a Manhattan Project-style energy initiative, or begin building a base on the moon, the iPhone 5 would be just a little spark. But…  nope.

So – the Dream is at recess now. But do check back later – we might have space tourism and near-infinite fusion energy pretty soon!

It’s Tuesday night here in Japan – going to sleep.
When I wake up, I’ll check the news straight away, and I’ll be excited about the phone I will own in a few short weeks. It’ll be awesome, I’m sure. And the world’s most valuable company will get more valuable, I’m sure.

Goddamn I hope we wake up and start dreaming again soon.
Yes, I know that sentence simultaneously makes no and perfect sense.
And hott skills like that are why I’m in charge around here.

They also keep it nice and quiet.

(So, a relevant retrospective, one hopes. Apologies for the rampant self-referential pronouns. Anthrobotic’s 6-7 regular readers know that over the past year I’ve moved away from using I as much as I did here because it makes I seem like I love me some I more than I should which is probably true but it’s a secret, shhhhh. Oh and also I wonder if “hippy” is still in popular use…) 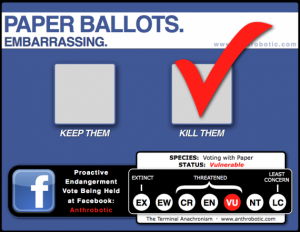