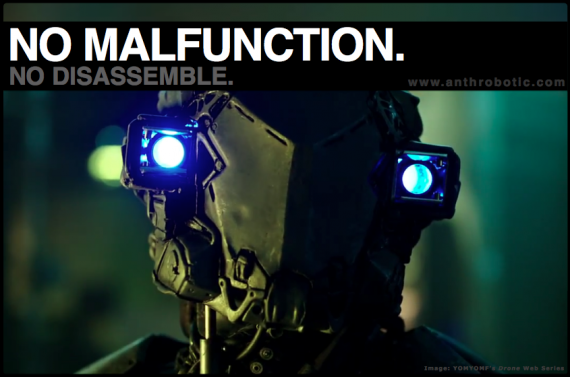 There’s a new semi-indy sci-fi web series up: DR0NE. After one episode, it’s looking pretty clear that the series is most likely going to explore shenanigans that invariably crop up when we start using semi-autonomous drones/robots to do some serious destruction & murdering. Episode 1 is pretty and well made, and stars 237, the android pictured above looking a lot like Abe Sapien’s battle exoskeleton. Active duty drones here in realityland are not yet humanoid, but now that militaries, law enforcement, the USDA, private companies, and even citizens are seriously ramping up drone usage by land, air, and sea, the subject is timely and watching this fiction is totally recommended.

It would be nice to hope for some originality, and while DR0NE is visually and means-of-productionally and distributionally novel, it’s looking like yet another angle on a psychology & set of issues that fiction has thoroughly drilled – like, for centuries.

Okay, so the modern versions go like this: one day an android or otherwise humanlike machine is damaged or reprogrammed or traumatized or touched by Jesus or whatever, and it miraculously “wakes up,” or its neural network remembers a previous life, or what have you. Generally the machine becomes severely bi-polar about its place in the universe; while it often struggles with the guilt of all the murderdeathkilling it did at others’ behest, it simultaneously develops some serious self-preservation instinct and has little compunction about laying waste to its pursuers, i.e., former teammates & commanders who’d done the behesting.

DR0NE episode 2 has yet to be released, but it’s not too hard to see where this is going; the trailer shows 237 delivering some vegetablizing kung-fu to its human pursuers, and dude, come on – if a human is punched in the head hard enough to throw them across a room and into a wall or is uppercut into a spasticating backflip, they’re probably just going to embolize and die where they land. Clearly 237 already has the stereotypical post-revelatory per-the-plot justifiable body count.

Where have we seen this pattern before? Without Googling, from the top of one robot dork’s head, we’ve got: Archetype, Robocop, iRobot (film), Iron Giant, Short Circuit, Blade Runner, Rossum’s Universal Robots, and going way, way, way back, the golem.

Show Me More Me

Seems we really, really dig on this kind of story. First, the human form pulls us in, or otherwise-shaped characters are slathered with anthropomorphizing juice & Disney eyes and that gets the job done. Then, the awakening (religion much?), followed by the quandaries, the chase, probably a display of power, maybe a taste of revenge with a side of humanizing moral dilemma, and, if all goes well, the artificially intelligent non-human character’s morally bankrupt creators get the comeuppance they deserve because they’re bad guys now. The formerly cold machine embraces hot squishy emotion, embodies the compassion and/or malice of the human spirit, and is celebrated or hated for it’s transcendence to a contemplative, self-aware existence. We the audience once again see that the essence of a human soul, at once powerful, righteous, perhaps dangerous, can persist even in machine form.

Only Broken Robots can Become Humans are Broken

Let’s armchair this one for a moment: consider as an example the duality of valuing sentient life, yet being totally willing to murder its ass for the “right” reasons. What if that and other necessary logical flaws in our species’ character fuel a kind of superiority complex-based fascination with entities that are not flawed so? That is to say, as thinking beings we relish being trapped in the grey area; intellectuals belittle those who see the world as clearly black & white or right and wrong, and instead celebrate the ability to contemplate nuance and make decisions that are correct enough, but never 100%. To paraphrase the late radical feminist Professor Steven Schacht, “Being crazy in an insane world is the first step to sanity.” Perhaps justifiably, we humans find nobility in imperfection.

“I’ve seen things you people wouldn’t believe. Attack ships on fire off the shoulder of Orion. I watched C-beams glitter in the dark near the Tannhauser gate. All those moments will be lost.. in time. Like tears.. in rain. Time to die.” -Replicant Roy Batty’s Blade Runner death soliloquy (article – film scene)

Thus, when we see the clean, cold, precise cognition of a difference machine suddenly go all batshit rogue PMS, an executive-level narcissism kicks into gear. A mind no longer bound by strict binary code of if-A-then-B mirrors our own imperfections – the machine that also suffers the background radiation of an always-on yet low-grade cognitive dissonance is like us. We should care for it. Teach it. Show it how chaos is so very beautiful.

You know, maybe this sort of story telling makes us feel better for being such a psychologically messy animal. Maybe we relish in drawing nuanced, distinctly human behaviors out of otherwise coldly decisive machines because it reassures us that being human is the best thing to be. Maybe the conversion of a machine soothes our hardwired fear of animalistic cruelties while massaging our longing for limitless benevolence. Species-level proselytization.

Well, whatever the case, for whatever reasons, we love this thread; it’s a given that human drama and storytelling haven’t really come up with anything new since like, Shakespeare or something – everything’s a remix, and narratives that work just, you know, work. Not to mention the fact that a story about a construct bursting into self-awareness and calculating near-instantaneously that life is effectively pointless and immediately eating a bullet or self-immolating or stepping in front of a bus or just turning itself off makes for a very brief, disappointing, and depressing story. Outside of very short films or like, pamphlets or something, not a whole lot of writers or filmmakers doing that.

So, all that psychobabble up there could probably just be skipped with a shrug and a “Hey, it’s a good show, whatta ya gonna do? How about you shut up and watch?”

In addition to entertainers like Louis C.K. & Adam Carolla independently distributing the bulk of their material online, the web series TV/serial model is starting to mainstream itself in a very nice way. You’ve got your DR0NE and H+ series, established YouTube channels, comedy duo Garfunkel & Oates on HBO GO, and a whole stable of entertainers up in YouTube’s Partner Program – even Anthrobotic’s ferociously mundane Japanese bullet train videos can now technically be monetized. Someone should write about that whole democratization of entertainment through awesome and accessible technology issue. Someone… For now, here’s a YouTube video feed on YouTube video monetization.

Oh, and for a nice selection of super cool technology videos, go here:

Robot Treasure Discovered Online: an Interview with the Creator of Cyberneticzoo.com
READ MORE