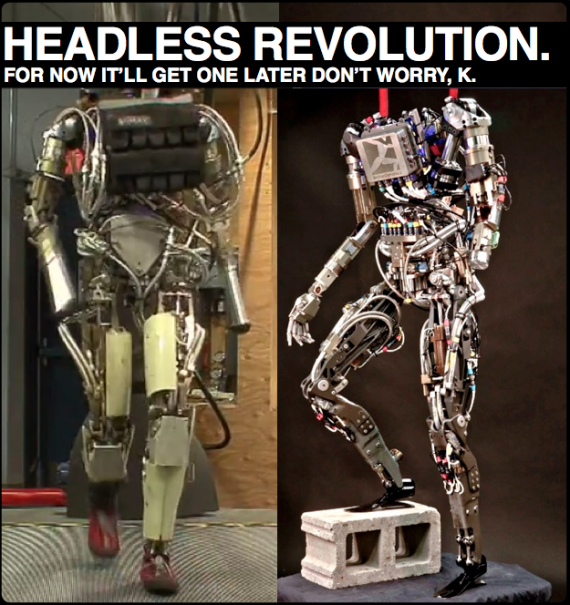 The Temptation of Hyperbole
You ever like, you know, watch something – really, really look at it – remind yourself that it’s real, and then realize in the moment that what you’re seeing is without precedent?

If not, watch this video. Really watch it. It’s like witnessing a birth.
(hi-res here)

Now, there are plenty of humanoid robots (androids) under development out there (here you’ll find a broad spectrum of the state of the art). Some are quite new, some old. Many of them are jaw-dropping in one or two ways, but most are just a set of legs with big flat feet balancing a dead-center torso doing an awkward slow-mo hula dance.

For fun, let’s compare two of the best:

ASIMO
Honda’s ASIMO has been in development for more than 11 years, is self-powered, and more than 100 units have been manufactured – certainly an achievement – but he’s the size of a child and for now has few capabilities outside of walking, trotting, serving drinks, and being controlled largely by remote (in VERY controlled environments). He’s also got his own software with voice recognition and stuff – which is cool. I don’t think Honda set out to build a humanoid robot for it’s own sake, ASIMO has always been a research platform. BUT, Honda does bill ASIMO as the world’s most advanced humanoid robot.

PETMAN
Boston Dynamics’ PETMAN is human-sized, can walk, squat, do pushups, not fall over if shoved, and is self-balancing without the standard square pancakes for feet. Perhaps most profoundly, as with Honda, Boston Dynamics didn’t develop this full-sized android because they wanted to make an android, they needed a platform for the U.S. Army’s clothing testing process – using actual soldiers to bash kneepads and evaluate the effectiveness of protective gear in hazardous environments is obviously not such a good idea. So Boston Dynamics creates PETMAN, and in the process, in terms of locomotion, sorta accidentally jumps way past any other bipedal humanoid robot. Ooops. Give it a head, power source, some software, maybe a firearm or sharp stick, and the Army is going to definitely keep adding to cart.

ASIMO. PETMAN.
One’s a top of the line CD player from 10 years ago.
The other is an iPhone 10 prototype with the cover removed.
Namsayen?

Technological leapfrogging is a helluva thing. 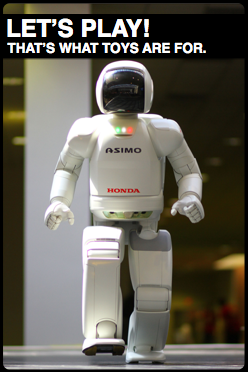 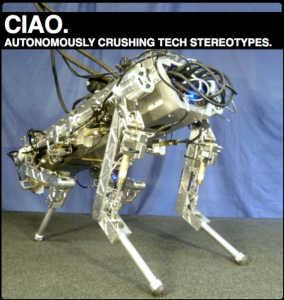