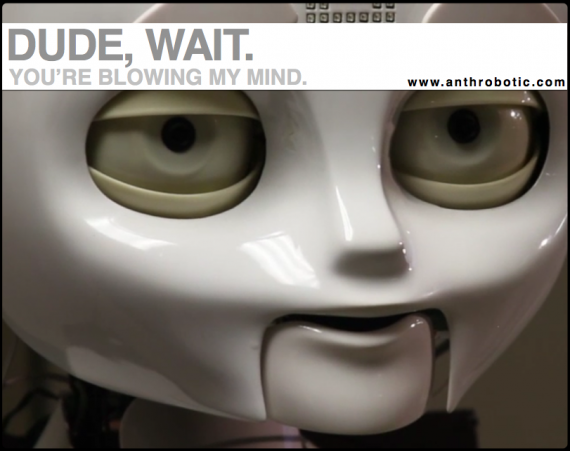 It’s Totally Not What it Looks Like
At the U.S. Navy’s new LASR research facility (Lab for Autonomous Systems Research), they’re making robot firefighters – and it’s really excellent work. But, I’ve seen a few robotics and tech websites (no names) kinda making fun of some recently publicized research (video below, and via Gizmodo). It’s really not fair, and kinda irresponsible.
Here’s why:

This is Not the Robot Anybody’s Looking For
Yeah, the robot above and the one in the video below, which do look a bit high, are primitive, slow, and physically ineffective. But what you’re seeing here is the software end of the mule. Robotics reporters should know that this outdated platform is an MIT facial gesture tester from 2008. It appears here simply to give a physical presence to the artificial intelligence that’s learning by observing gestures and parsing human speech – this is merely proof-of-concept, which obviously works better with a stand-in physical presence.

Obviously, right? I mean, in this project it would be silly to pursue a wheeled or tracked robot of any kind, because it’s like, you know, the Navy. With boats and stuff. They tend to be kinda cramped. And have stairs. And are made for people.
So… you know – just sayin.

2 + 2
Okay lets see, I’m going to go ahead and make the not-at-all unsafe assumption that the Navy’s fancy new Laboratory for Autonomous Systems Research is pretty hip to what’s going on over at the Naval Research Laboratory (NRL). Hell, the former might even be part of the latter! Looking just a bit closer at the issue – surprise, surprise: here’s a timeline of the NRL’s 85-year history of autonomous systems development, including the March 2012 announcement of the LASR facility, where the above seemingly baked robot is doing his thing.

Curious kids might wonder what else goes on at the NRL, and a few seconds of reading reveals a startling correlate! Along with Renaissance Roboticist Dennis Hong’s world-renowned RoMeLa team, the NRL is working on a humanoid firefighting chassis called SAFFiR, the Shipboard Autonomous Fire-Fighting Robot. 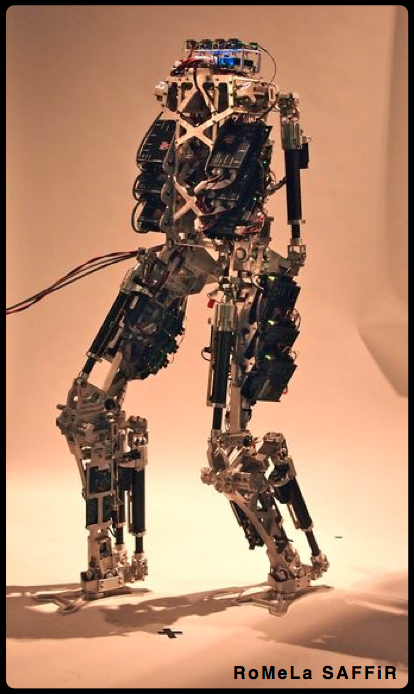 Well, gee whiz. For the very same agency you’ve got: 1. A team recycling an older robot to work on firefighting software; and, 2. Working some firefighting hardware you’ve got a firm founded by one of the most brilliant roboticists on the planet. I’m pretty comfortable out on the limb of assumption that these teams are going to get together on this one.

So, yeah.
There you have it.

Aim Before You Shoot , Yo.
Being a semi-humorous technology writer (to myself, anyway), I’m sure I’ve over/understated plenty of points, so I’m probably guilty as well. And, certainly not every robotics project should be taken seriously – some really are dumb as hell. But this autonomous firefighter program ain’t one of them. This is the U.S. Navy and RoMeLa, and about as cutting edge as it gets. Even if it fails, it’ll still teach us a lot.

We writers and commentators who study and report on robotics are free to say whatever. For example, unlike many, I often say “shit” and “hell” and “goddammit” when writing about technology. But my profanity is born of passion, and if we’re passionate about the state of robotics and where it’s headed, we damn well better take care to actually know what the shit we’re talking about and responsibly inform the public. Or, in my case, about 6 people.

Recognize.
On the surface these 1-minute videos do look kinda weak, but I think we technodorks have a certain responsibility to show why they’re actually progressive steps in a really awesome project. Rushing to judgment or ignoring context is really disrespectful, and believe me, I know disrespect – just ask the homophobic technotard senator from Oklahoma who last year opened his ignorant mouth about robots he didn’t understand.
Let’s not be like that guy.