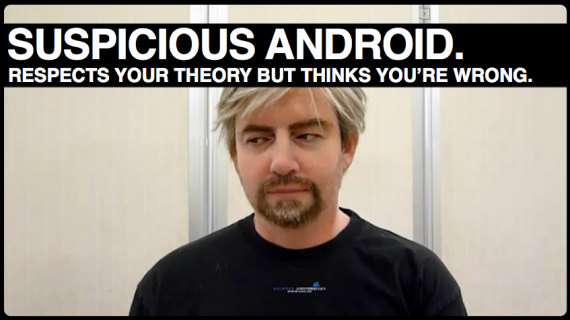 Expressive, and Bearded, Android
This is the latest public version of the Geminoid, the Geminoid DK. The android is the result of a collaborative telepresence project by some Danish guys with Geminoid originator Hiroshi Ishiguro. Watch the video below for a few examples of DK’s expression capabilities – it’s a demo of what he can do – of course this would be slowed and timed for actual conversation.

Human Psychology Uh-Oh
Okay, just there, just now – without even thinking twice I just typed the pronoun “he.” Seeing what I saw, that was the word in my head. One small word, one huge concept – and I don’t think I’m alone here.

Mr. Mori’s Valley of Creepiness
What got me started on this today is that I was reading WIRED Magazine (not with paper, of course), and perchanced across a brief interview with Masahiro Mori – the guy who coined the term and developed the concept of the Uncanny Valley. It’s a theoretical point where humanlike robots cease to be cute or fascinating but instead elicit revulsion and disgust in human humans.  Now, Mori’s theory was good for it’s time (1970s), kinda prophetic, even. But I think his greatest concerns will likely never be realized. Androids aren’t going to reach that point where they’re just human enough to be creepy, yet not quite human enough to accept – they’re going to leap past it.

Wired: “Do you think it’s possible to bridge the uncanny valley?”
Mori: “Yes, but why try? I think it’s better to design things like Honda’s Asimo, which stops right before it gets to be uncanny.”

Stop at ASIMO?
All due respect to Mr. Mori, but that’s more than a little amusing.

Here’s a visual for what he’s talking about: 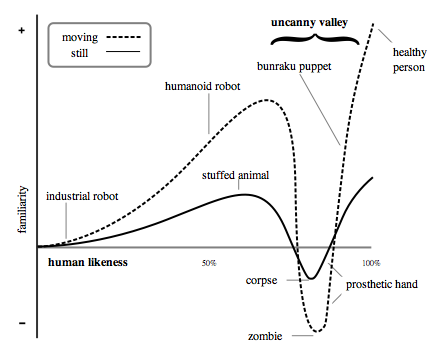 A Valley Too Wide Will be Flown Over, You See.

Longing for “It” To Be “He/She”
As a species, we almost can’t help but anthropomorphize – we do it with even the simplest technologies (my Tamagotchi is hungry and/or irritated), and we do it with the most complicated non-human biological species (our pets are happy, dolphins are smart, our prey is scared, etc.).

Otherwise stated, we WANT to see human traits in other entities. Maybe it’s a way to avoid the insanity of true solitude, maybe it’s just something we do because it’s something we do. So, have a look at this video below. Maybe this is pretty close to the uncanny valley – but honestly, it doesn’t seem all that uncanny – it’s in fact at least a little bit canny, which is totally a word by the way. And something inside us truly wants to relate to this creation, this “thing.”

How much farther will this will go in 5 years? 10 years?
Much, much.
This thing (I really want to say “guy”) is nearly a year old and quite humanlike. More and better are coming. Within this decade, Androids could be essentially indistinguishable from a fleshy meaty human like you and I.

Until they start talking. That’s another issue.
But if we’re talking for them, in a telepresence sort of way… if it’s this good now – just wait. In the future we might meet a lot of people who we’ve never actually met before.

Yep – technological leapfrogging is a hell of a thing.

P.S.
Now this thing, the Telenoid: 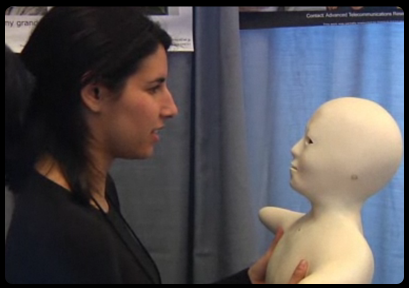 Yep. Completely creepy. Middle of the valley right there. Uh-huh. 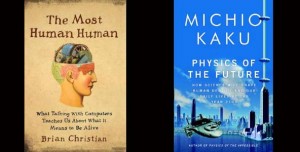