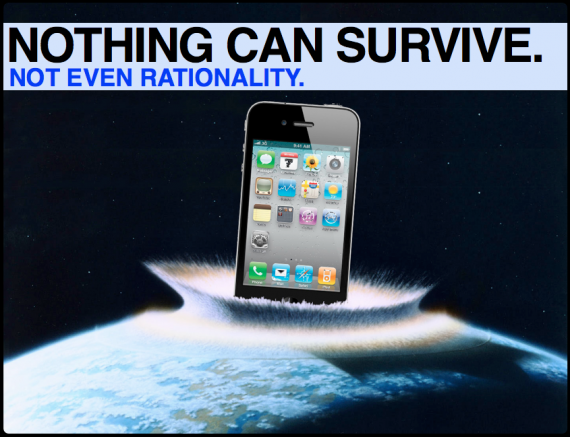 …wherein I share my peculiarly offended mobile telecommunication sensibilities.
My pre-apologies for writing such a personally directed piece.

But, meet Andrew Keen. He is a ‘digital commentator.’
A few days ago he wrote a piece on the evils of mobile phones, and it’s just been festering and bothering.

I’ll Summarize
Via CNN, Keen quotes some futurist guy named Hammond:
“He then warns us about a future in which virtual reality will
become so mobile that we will be able to wear it under our skin.“
The flaming retardation of that line alone, and it’s non-ironic inclusion in the piece, kinda sums up the comprehensive absurdity of Keen’s anti-mobile phone rant. It’s so obnoxiously misinform(ed?)ing and irresponsible – burns my eyes to read it.

Bad Press for Technology
See, my bother stems not from my technological utopianism butting up against the technological conservatism* of this piece, it’s really just that what he says is so knee-jerk ridiculous that it borders on satire – borders, but doesn’t cross. Instead it just smugly and blithely foments racism and calls for deploying the national guard. So to speak. Sorry – that’s not going to penetrate for all readers.

Anyway, a nuanced, carefully considered presentation on the nature of contemporary and future mobile communication and how it’s changed our lives (for better or worse) would have been an interesting read, even if the conclusion was still one of pessimism or caution. But it’s just, you know, not that at all. It’s an attack piece on a beautiful human technology.

Smells Geriatric
In the piece Keen figuratively details how mobile phones are a kind of creeping cancer on human communication, privacy, etc. And then literally, he repeats the scientifically inconclusive and oft-rebutted phones-could-give-us-actual-cancer line without even mentioning that for every independent study indicating a possible, only possible health risk, there’s another reporting that they’re simply benign. Perhaps that fact could at least, oh I don’t know, be mentioned somewhere near this particular scare tactic?

I thought shunning journalistic decorum was my thing.

Billions Communicating is a Very Good Thing
Read the piece, and you’ll see there’s not even a cursory mention of the countless benefits of mobile telecommunication. There’s nothing on the mobile phone-based technological leap-frogging that’s linking the previously unlinkable developing world with the sum-total of humanity’s digital knowledge. Nothing about mobile phones being used to coordinate protest and freely speak to the world and if needed deliver evidence of wrongdoing from the palm of one’s hand. And nothing about accelerometer-actuated alien invasion FPS games.
Nope.

Yeah, the Article is Bad.
So Why Care and Why  Share?
We shouldn’t blindingly accept/embrace any technology, but we should at least consider both benefits and drawbacks before pouring out such negativity through the bullhorn of a global media giant like CNN. That’s what bugs. Of course CNN is as CNN does – they’re status quo medium and no one expects greatness there. But this seems kind of neglectful.

Keen is not trying to inform or educate, I think he just wants other people to agree with his personal fear of new technology through the contrived proxy of the mobile phone; he’s trying to whip up a mob (other technotards) to burn someone in the public square (mobile phones) because he finds it threatening to his worldview (the rotary dial was far enough, or I don’t get it, or it’s not what I want, or she’s a witch because sufficiently advanced technology is indistinguishable from magic. Props to Arthur C.).

Or maybe, BIG maybe, he’s identified that most people do tend to be technologically conservative,* and that makes for a huge fan/consumer base, and if he can flick out the occasional nugget of dramatic techno-fear, well, people love to have their pre-held beliefs reinforced – so he’ll get madd paid. CNN’s maybe just running a 1000-word ad for Keen’s other products here.
Genius.

Either Way, Doesn’t Help
Whether it’s that he’s just not bringing his A-game to this article, or he’s milking an insidious manipulation of the walking dumb for profit (which honestly, does kinda appeal), the end result is a baseless, misinforming, and sensational soapbox rant that nudges the consuming laypeople toward fearing and distrusting technology rather than understanding, controlling, and using it to better our lives.

As a tool of satire or irony, I do love me some hyperbole.
As a cudgel of fear and ignorance, not so much.

Mr. Keen, am I wrong here?
You can hire me as a foil if you want.

*Conservative, Adj. A strong and often illogical aversion to change based on a fallacious idealization of the the past and irrational fear of losing one’s power and/or control. Often, but not always, accompanied by dumbness. Rel., ‘liberal,’ the pop-culture antonym with its own special wardrobe of idiocy.
-Anthrobotic’s 2012 Dictionary of Useful Terms According to Reno

For more on how technology’s ruining stuff, but not, see:
The Good Old Days are a Myth
Right Now Nearly Everything is Better than it’s Ever Been