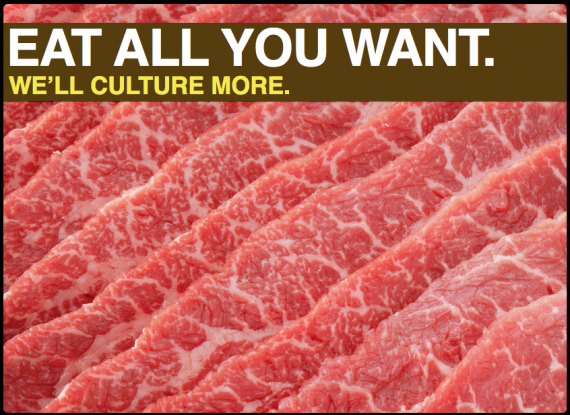 Lab-Grown Meat & The TransPostCarnivore Movement
There is no movement – I just needed a title. But the subject is intriguing. I am an opinionated technodorky futurist and eater of almost anything other than natto or mayonaise, but I have to say this is one issue on which I can’t really nail down a personal opinion. But I’m wildly intrigued.

Eat It?
Conceptually, I wonder if we can really bring ourselves to eating fake meat for more than the temporary novelty of doing so? As with most consumers, I numbly pick up meat package A, B, or C without a thought for how it arrived safe and clean in my little market – which to be sure is it’s own little horror show. Whether or not we can also overlook the production processes of cultured meat is going to depend largely on taste and and price, but perhaps most significantly on marketing.

And there are miles and miles of marketing angles out there. Think about it – if you recoil at the idea of cultured meat being somehow gross or unnatural, have a look a this Google image search for “factory farm” and then parse for yourself the meaning of “gross and unnatural.”

So, should the fake meat technology be pursued? Without a doubt.
What would vegetarians & vegans think? Who gives a shit!
Will it be halal? Good question.
Will anyone want it?
TBD.

In One End, Out the Other – Repeat
I’ve been waiting to pinch this one out there:
In nearly year-old related news a Japanese research team is making “meat product” from human poo. Note how the researchers’ nationality elicits exactly zero surprise.

THIS STUFF IS RELATED:
Japanese Technology from the Future Friday!
READ MORE