Intro excerpt:
What we conceptualize as our discrete Physical Self isn’t nearly as cut and dried as we might think, and the non-corporeal Mental Self seems to have some blurry boundaries as well. We’re Cyborgs, man. Philosophical Cyborgs. 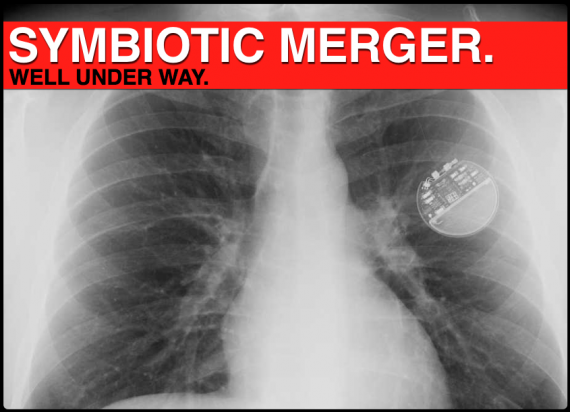 Cyborg Stuff
There’s an interesting piece over at NYT – The Dilemma of Being a Cyborg.
I’m not entirely sure what the dilemma is, but cyborg stuff is no small deal here at Anthrobotic, so it merits some consideration. Here are a few thoughts to roll the ball:

What are the Boundaries of my Physical Parts?
Okay, so I’ve got my guts, and my bones, and my connective tissues – like most people, that’s what I refer to as my physical “self,” the physical Me.

But… then I’ve got a few fillings and a few non-biological implants. Are those things any less Me? Are they just add-ons? What about the various bacteria and teeny-tiny bugs that at all times live in/on my body? Are those Me, too? As part of a whole bacterial culture, individual components pass and new are born – and at a molecular and sub-molecular level, nearly every cell in my body does essentially the same thing.

So my physical body, my Me, seems to be a bizarre combo platter of the co-dependent fauna, the implants (cyborg?), my body’s dead-cell accumulations of hair & finger/toenails, plus a kajillion transient molecules working in concert, following a recursive pattern that repeatedly results in my distinctly human biological structure, i.e., all my bones and squishy parts. In sum, these components make up my essential physicality, my manifestation, my both internalized and projected physical reference point for the world around me.

Well, I guess the thing is this: every living human is in a symbiotic relationship with the millions of other organisms contained by our bodies, and by definition many of us are already cyborgs (Dick Cheney, Stephen Hawking, Me). As such, what we routinely conceptualize as our discrete physical “self” isn’t nearly as cut and dried as we might think. Or, quite necessarily, not think. Too much thinking about this would result in psychosis and/or a PhD in biological philosophy or losing one’s religion or something.

Technology’s helping us further explore and understand these ideas, but the catch is that it’s also totally complicating the issue.

Because What about the Boundaries of my Personhood?
Where is my Personality, or Soul, or Whatever?
Cyborg Anthropologist Amber Case, famous among technodorks, argued in 2010:
“Hey! Yeah you – got a smartphone? Yeah, you’re already a cyborg, yo.”
I’m paraphrasing – unfortunately she probably doesn’t talk like me. And yeah, in a sense it’s stating the obvious, but her angle is the revelatory cyborg thingy. It’s a good point that seems obvious when you think about it – but who ever stops to think about it?

As I look down at this machine of aluminum and plastic and exotic metals and chemicals, I know a good deal of my very own mental self is either ported to or backed up on this personal laptop computer. And then there’s also the expression of me manifested by my personal mobile telecommunications device. As with the physical self, the non-corporeal mental self seems to have some blurry boundaries and cyborg implications as well.

Makes one wonder – my Gmail account, for example – what percentage of my Me is that? What about the “Pictures” or “Movies” folder on my computer? Otherwise stated, how much of my Me is non-biological data?

Me. What is Me?
We’ve got both the physical and the mental here to consider – simultaneously separate and not. And at some point down the road (probably not too far), a human being will either physically or mentally become less than 50% biological, and we’re going to have to figure out how to deal with that.

These are of course age-old questions of self and mind, but these days human life is changing faster than ever – like, seriously – and it’s difficult to overstate the profundity of experiencing more fundamental change as a species in the last 500 years than we did in the 200,000 previous. And even if you don’t dig on Kurzweil’s exponential twist, anyone who’s paying attention can clearly see that technological advancement, including the ever-shrinking delineation between human and machine, continues to accelerate.

The Dilemma of Being a Cyborg Again
So yeah, read the Times story referenced aboive. Have a think. It seems to be a bit on the technologically conservative side of things (“Luddite” is a stupid word – screw using that). There’s an air of something being tragically lost, rather than transferred, to the digital storage of our increasingly cyborg selves. But hey, cave paintings became ritual dances became oral histories became written and recorded histories which then necessarily became digital, compact, and readily accesible in our complicated modern lives. Just saying, it’s rather one-sided and a bit myopic to imply we’ve lost something of value without considering that value might just be moving to a new medium.

Goddamn…brevity this ain’t. Will stop here. But check out the NYT piece and Amber Case’s site. Sure, it kinda hurts the brain to think too hard on this stuff, but we really, really need to.