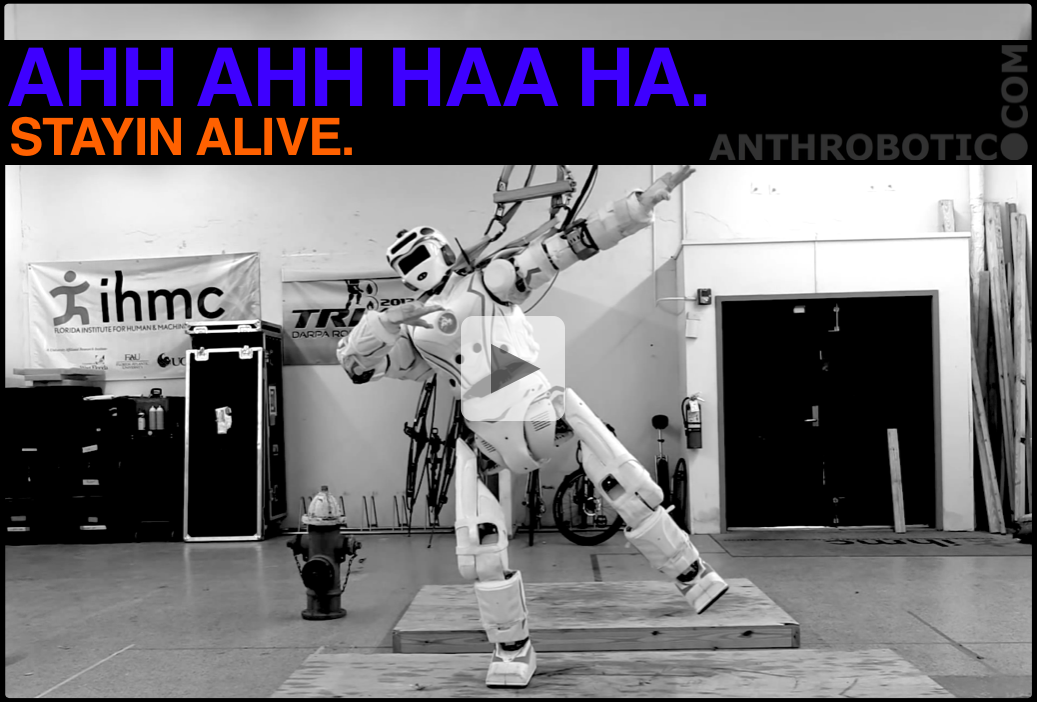 Next to Team SCHAFT’s new Google overlords withdrawing them from further competition, the poor showing of NASA’s Valkyrie robot might have seemed the DRC Trials’s biggest disappointment, but it’s nowhere near that simple: NASA JSC and the Florida Institute for Human and Machine Cognition (IHMC) are keeping the flame alive, and by flame we’re talking like…nuclear blow-torch.

First, it is so very important to understand that, even with Robonaut tech and preceding humanoid research to draw from, it is proper amazing that the NASA Johnson Space Center’s Dexterous Robotics Laboratory took the Valkyrie humanoid robot (AKA “Val,” AKA “R5”) from initial concept to DARPA Robotics Challenge-ready in only 10 months. Sure, NASA had their eyes on full-body humanoids long before the DRC, and even Robonaut got legs back in 2012, but still – much respect due – NASA regularly does world-changing work on a disparagingly tiny budget.

Now, as a vague concept and stylish rendering, Valkyrie had been known to the public for some time, but the actual robot wasn’t seen outside of NASA JSC until about 10 days before the December 2013 DRC trials began. The robogeekosphere wasn’t exactly surprised at the unveil – again, because NASA – but everyone was madd impressed by the overall mobility, dexterity, self-containedness, and the pack-leading visual style NASA brought to their fully clothed and clearly capable humanoid. 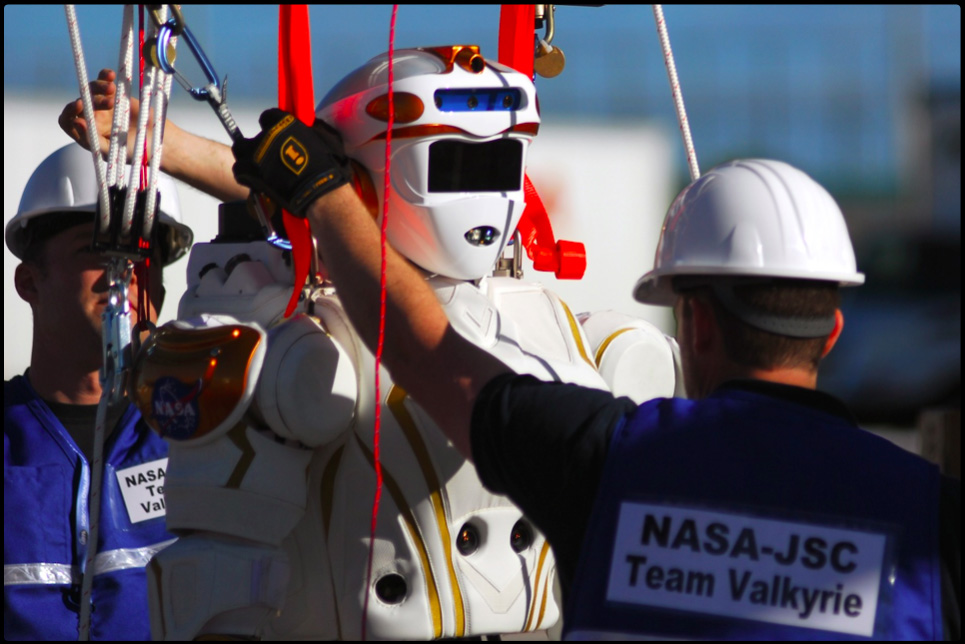 Unfortunately, all the excitement generated in that initial week quickly deflated on December 20 & 21 when Valkyrie slipped into an interminable seizure of disconnected immobility; the NASA JSC team ultimately scored exactly 0 points in the DRC trials. The hardware should and probably could have handily gone head to head(less) with Team SCHAFT (the runaway winner), the ATLAS-powered entrants, Carnegie Mellon’s CHIMP, and the SIMIAN robot from a sibling team at NASA’s Jet Propulsion Laboratory, but Valkyrie’s controlling software and comms systems just weren’t up to par.

That unfortunate showing in December of 2013 was thankfully not where Valkyrie’s story ended.

Space is Calling, and IHMC is Choreographing a Valkyrie Phoenix Act

Post-DRC trials, NASA decided to forgo independent control software development for Valkyrie and instead partner with the Florida Institute for Human & Machine Cognition (IHMC), whose Track B ATLAS team finished a distant but respectable 2nd behind Team SCHAFT in the DRC Trials. And that totally makes sense. Sure, NASA JSC went from zero-to-badass-robot in 10 quick months, but it was going up against teams with long-established, time-tested and proven control architectures. Team SCHAFT, for example, uses software that rests on 30 years of Japanese bipedal robotics development (SCHAFT and ASIMO even have a common ancestor).

So, NASA JSC will continue consulting and providing hardware expertise, and with their software game well nailed down, IHMC’s taking over the rest. This video, just a few days old, shows the considerable progress they’ve made with the Valkyrie platform:

June 5th, the DRC Finals’ opening day, is quickly creeping up, and even though IHMC’s already got a perfectly good ATLAS to play with, a surprise Valkyrie audible would be a more than welcome change-up in the ATLAS-dominated field (Anthrobotic’s reached out for comment; nothing yet). In all likelihood though, Valkyrie’s done with the DARPA robotics challenge, but it’s clear that the right software would have made the pretty white robot a contender.

For the now and to come, what is known is that IHMC plans to both continue developing Valkyrie’s DRC-specific skills and work toward greater proficiency in those needed to fulfill the robot’s NASA-specific mandates: space fairing and surrogate/autonomous off-planet exploration.

As Robonaut is to Valkyrie now, so will Valkyrie someday be to yet unborn generations of supertech NASA humanoids – maybe even ones that build habitats, change tires, and grow tomatoes on Mars.

Okay now who wants to buy a dorky t-shirt?
↓ 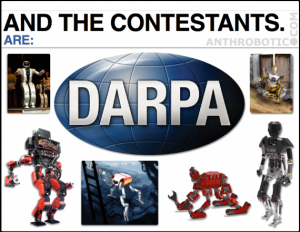 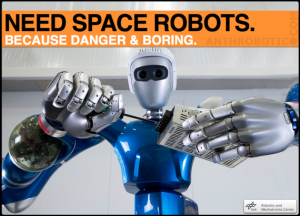 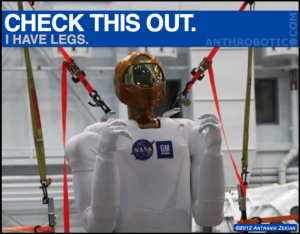