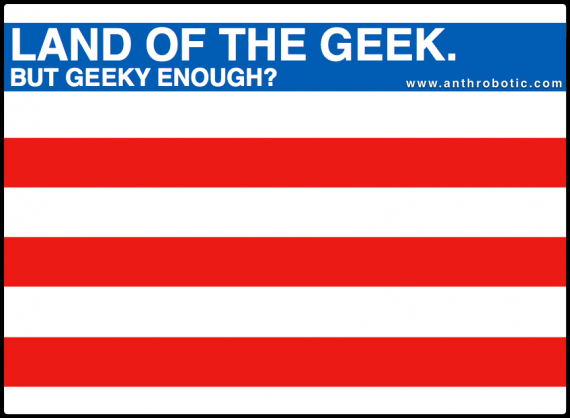 Happy Day After Independence Day!
My fellow Americans (and friends), now that it’s the day after the Fourth, and you perhaps remain in a BBQ coma or hungover or maybe even injured by small explosives (or all of the above), Anthrobotic has a question to ponder for the evening:

:: Proverbially, does America still have the Technological “it?“  ::

Before you answer, let’s first make with some cheerleading:

Anthrobotic’s Top 5 Awesomest American Technologies as of Right Now:
1. Robotics – seriously, even the Japanese got nothing on us these days.
(see: ROMELA, Boston Dynamics, Willow Garage, U.S. Navy)
2. Energy – take a few moments to get yourself hip: National Ignition Facility.
They’re about to make fusion with huge lasers that can melt the universe I think.
3. Computing & Communication – made in China, designed in California. Yep.
Unmatched CS, AI, & NBI education, Twitter, Facebook, IBM, Intel, Google, etc.
4. Military & Defense – okay yeah, not so uplifting, but always badass cutting edge.
Unlike its economic cousin, Trickle-Down Techonomics* works. Can you say “Internet?”
5. Entertainment – movies, TV, gaming, music; fast, cheap, ubiquitous content delivery.
This really should be factored into the U.S. trade balance. Avatar has made $2.7 billion.

Unapologetic Disclaimer: American Technological Achievements are in part Possible via Snatching up other Nations’ Hottest Scientists KTHXBAI!
From where the sun now stands, no other nation can so effectively combine its citizenry’s best minds with those vacuumed up from another land, brought voluntarily to a (relatively) safe and free society, and set toward making super-sexy science with encouragement and funding. Admittedly, antiquated immigration policies and a recently diminished sciencyness in politics haven’t been good, but on the whole – on such a scale – this sorta thing ain’t really happening anywhere else.

236 Years of Assimilation!
Now, of course there are loads and loads of awesome technological endeavors in other places around the world, and that’s lovely (Can you say “evidence of the Higgs Boson?”). And yeah, it is debatable, but I think most experts would agree that the bulk of the world’s best technological development takes place in the U.S.A. However, there is a qualifier.

Not exactly a bunch of Bill Smiths and Bob Johnsons. Actually, most American technology products have a contributor/developer list that reads like roll call at a United Nations luncheon. So, in making the statement that the U.S.A. wins the world in tech, implicit is that that it’s because of both the beautiful minds born there, and those who’ve joined the team from abroad.

Such is the history of America – we stir the global cultural soup.
And then we eat it.

Outlook Most Probably Positive
In almost a defiance of the diversity of the American population, by some miracle we all get along relatively well (and we don’t even need a dictator!). We also got money: according to some estimates, the U.S. economy is still roughly 2-3 times the size of #2 China & #3 Japan. And, after you sprinkle some narcissism and lust for fame & riches over the “The American Dream” salad, well, from massive corporations down to geeks in the garage, you win at technology.

In America, that winning will produce more win, because in many ways, technological utopianism is the heart and soul of the United States; technology has driven our hyper-speed development and rise to global prominence. There’ve been dark days, to be sure, but as with the general arc of human development, in aggregate it’s all very positive.

New Americans Wanted
Now, if we can rejigger immigration a bit, particularly for those with letters after their names, we’ll continue to lure the best minds from around the world, insert them into the finest human cultural amalgam in the history of history, and have a helluva lot to be excited about in the U.S.A. here and now, and down the road.

Here’s to continuing our technological traditions.
And here’s to me getting a fusion-powered robot pretty soon.

*Trickle-Down Technomics™ © ® is mine.
Don’t touch it.