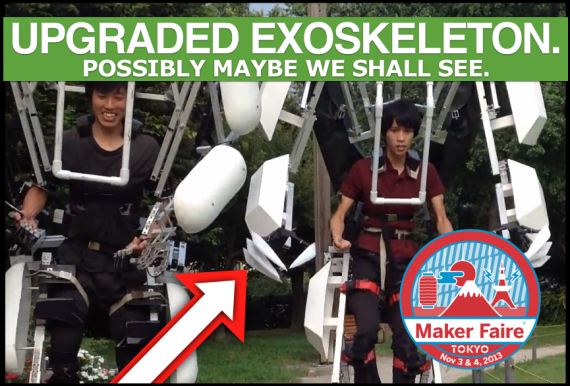 We’ve been in love with Team Skeletonics’ human-powered exoskeleton for years, and all throughout, it’s pretty much been the same mechanical and aesthetic configuration. But it now looks like they’ve been refining in the background, and might be bringing something new out to play.

Exoskeletons are Big in Japan
For those who aren’t hip, Japan’s got Cyberdyne’s HAL suit, then there’s Honda’s array of semi-exoskeletal assistive devices, Sagawa Electronics’ Power Jacket MK3,* Panasonic subsidiary Activelink is doing interesting work with their Power Loader Light, and industrial robotics giant Yaskawa Electric has recently moved rather boldly into exoskeletal robotic rehab and a funding and development deal for Argo’s ReWalk system. It’s all kinds of game-on in J-exoskeletonry.

And the Biggest is Human-Powered
The Skeletonics exoskeleton, by Team Skeletonics (say it 3 times fast), is less well known than some of the above, more so than others, but at 8′ 2″ tall (2.5 m), its physical presence definitely dominates the lineup. Though years in development, Skeletonics remains very much a research project with a working prototype. So, there’s really no specific target market at this point, but possibilities include crowd management, entertainment, construction, and, once a powered device becomes doable, first responder duties and perhaps even disaster rescue and recovery.

The team behind Skeletonics includes five classmates from an Okinawan “kosen,” a STEM-focused, 5-6 year high school/college mashup. Now based here in Tokyo, but far from being jaded by big city life, they exude a joyous, dorky enthusiasm for what they’re doing, and their work, regardless of its ultimate utility, is inspired and original.

Their promo and demo videos are cheeky, self-deprecating, and fun to watch. It’s easy to like these guys, and easy to enjoy almost anything they publish on YouTube – particularly when something new pops up.

Skeletonics 2.0?
A careful looking-at the image above and watching-of the video below reveals the suit on the right to not only be fitted with new angular limb-panel thingys and pokey white fingers, but it also incorporates a few structural changes – possibly unannounced upgrades. The hand interface also appears unfinished, and it’s unclear what those black sleeves are covering on the back.

Well, we’re pretty sure that this is a new model, but speculation is at best speculative. Since we’ve got boots on the ground here in Tokyo, rather than endlessly guess at what’s up with the new machine, we’re going to the source – and we know where the source is going to be in about 10 days: 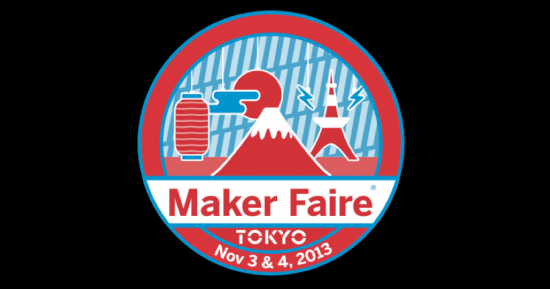 In addition to hosting a battalion of Japan’s executive-level DIYers and their homejobby robotics projects, Maker Faire Tokyo 2013 will also welcome Team Skeletonics – and we have a date. So, sans speculation, AkihabaraNews will return to Robohub in a few weeks with the scoop, exclusive photos and video, and other Maker Faire Tokyo coverage. Stay tuned!

*Addendum: the Great Japanese Exoskeleton Controversy of 2013
Although at this point it’s pretty much squashed, there’s controversy in the rearview between Team Skeletonics and Sagawa Electronics – controversy along the lines of Team Skeletonics being all like “Hey, I think those Sagawa guys totally stole our design.” For those who’d enjoy digging into the whole saga and getting more background on both teams, have a read:

This article originally appeared at AkihabaraNews.com on October 23, 2013.