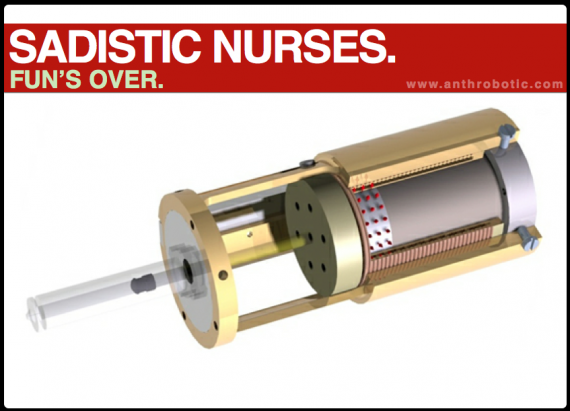 Toward Star Trek’s Hypospray
Every once and again, stuff from sci-fi arrives here in real life and is awesome. Case in point: MIT’s needle-free multi-drug-shooting mini railgun. It’s not the first non-stabby medical injection system, but with adjustable pressure & depth of penetration it’s a considerable improvement (the team is also developing a sonic liquefier for injecting powdered drugs).

Yeah, good – we can all agree that hypodermic needles, injurious by design and capable of spreading infection and poking people by accident and creating huge piles of disease-ridden super sharp medical waste, are totally not invited to the future.

Please State the Nature of the Medical Emergency
It’s a fair assumption that most sci-fi dorks saw this news and immediately thought about hyposprays from the Star Trek medical room sick bay doctoring place. And okay, while there may not be overt Star Trek inspiration at work with this new injection system, the conceptual parallels are like, you know, parallel. So, from a certain point of view (the right one, obviously), even in the reverse-derivative, what we’ve got here is life imitating sci-fi art. That last sentence doesn’t really mean anything, but you get it, yeah?

CAUTION: TAKE SCI-FI SERIOUSLY
Because Scoffing Brings Dumb out of the Closet
If you pay attention to sciency stuff and the nature of invention and technological development, you’re aware of the relationship between the consumption of sci-fi and the realization of product, i.e., scientists and inventors, inspired by fi, often dream up and create some practical, useable sci. Sikorsky’s helicopters & Lake’s early submarines, for example, were heavily inspired by Jules Verne. Or, if you need something a little closer to home, there’s the cell phone, developed by Martin Cooper’s team at Motorola.
Wanna guess which fi did the inspiring? 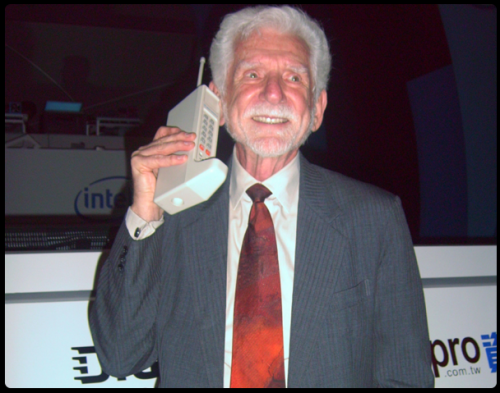 And now a few billion humans carry around the most powerful communications device ever in the history of history, and it fits in a small pocket, gives access to the sum total of all recorded human history and knowledge, captures images and video that can be sent to anyone anywhere anytime, and is available in a variety of colors and configurations to match your lifestyle, fashion aesthetic, and fanboy software preference.
You’re welcome.

Sometimes we also get it coming the other way – people who already do serious sci crank out some of the world’s best fi. Just like Smiley, Shiny, and Sideburns here.

So, recognize! And props to Star Trek and all inspirational sci-fi. A sizable number of modern technological necessities and niceties were at some point just geeky musings, and then they got published and/or produced, and then someone was inspired to make it so, and then a beautiful technology was born. Bravo! Here’s to the creative, and the creativity they inspire in others.

But…
As we’ve learned from the Pontiac Aztec, Research in Motion, nuclear weapons, and canned meats, we can’t just watch the world go by through a rose-colored force field (yet?) and blithely congratulate human technological prowess and scientific creativity without considering potentially negative effects.

The Dark Side of Sci-Fi Influence
As one might expect, the relationship between sci-fi and technological advancement is, well… not without problems. In fact, it can memetically monkeywrench an entire paradigm.

And what is that area of endeavor?
Well, tune in next time – the script gets flipped.