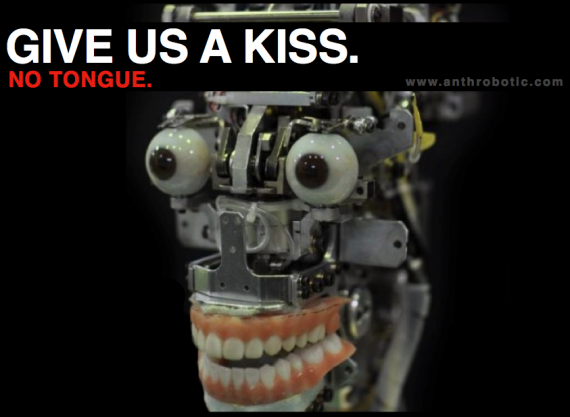 Now, the global sex industry isn’t just passively implementing new technologies, it’s occasionally driving their development. A classic example from back in the day was pornography’s embrace of VHS video, which played an important role in the downfall of Sony’s Betamax alternative (ref.). Granted, Sony is rather inept at pushing their pet media formats (Memory Stick, UMD, DAT, MD), so, you know, context. Anyway, here’s the thing:

And its a Big One.
I Think We’re Going to Make Sweet Love to Robots Pretty Soon.
I’m not even sure how to make the first move here. Anyone covering sex and robots knows how hard it is; brevity is a challenge, and, if you’re not careful, you can definitely go too deep. The topic is relentlessly penetrated by innuendo and double entendre, and one can go on and on for hours – just pounding away. So, I’m going to keep it as short, sweet, and casual as possible. Also, I don’t want to chafe or make myself seem to be overcompensating for some kind of impotence, so I’ll keep this a friendly piece with some benefits on the side. I hope you’ll be satisfied. And I hope I can get off the pun train soon.

The Big Deal
Among many others, Rodney Brooks believes the robotics industry, along with that of artificial/non-biological intelligence, is on the cusp of going bananas. He should know, he’s a causal factor. And, as reported and kinda supported by Wired, I’m not alone in projecting that, as these fields and android science in general rapidly advance, the sex industry will further incorporate robotics and AI/NBI improvements, and also catalyze further development.

In further personal projection, I’ll offer this: as our humanoid machines become less like sophisticated dolls (ex: Real Doll – NSFW) and more like us, sex with robots will gradually emerge into mainstream culture, people in Austin, Texas will continue writing strange little ambiguous articles about it, and eventually, an industry devoted to full-size, lifelike, communicative artificial partners will bloom. Fueled by the human sex drive, the market will demand it. Is what I think.

Correspondingly, it seems not too much of a stretch to assume that people will fall in love with their machines – not like we love a fancy car or really good blender, but proper romance. According to research at the University of Washington, with delicious irony we might also instinctively expect our machine partners to be loyal, and even moral.

Don’t think so? Think that’s a leap? Think it can’t possibly go that far? Well, consider our relationship with dogs for a moment. Hundreds of millions of humans love their extremely not at all humanlike dogs. Seewhattamean?
(SEE ALSO: Love & Sex with Robots, by David Levy)

Unlike canines, these machines will seem quite similar to us, and they’ll look nothing like the skull with dentures you see above, they’ll probably look a lot more like this: 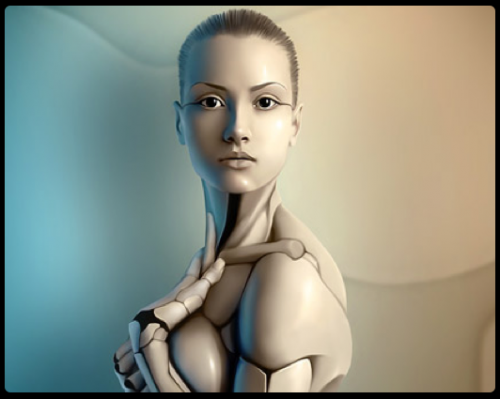 …or better – you get the point. And conversation far more complex than commands, barks, wags, and whines (unless, you know, that’s what you’re into) will foster genuine human attachement.

So, What Aroused the Issue?
Why this, why now? Well, first of all, it’s interdiciplinarily goddamn fascinating all the time – I’ll get into that. But specifically, the four articles linked above (repeated below), all independently published within the past week or so, got me thinking about conceptual convergence and the demarginalization of getting it on with non-living devices – including near-future intimate encounters with non-human-but-human-shaped machines. And honestly, a hedonistic manchild with a pathological technology obsession is going to be just kinda thinking about robots and sex most of the time. But dude, not all the time.
Anyway, it seemed timely. 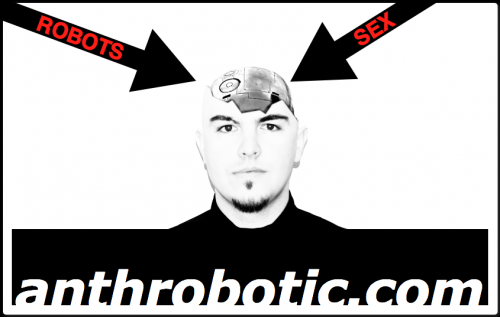 In all mostly seriousness, while human sexual relations with non-living things is nothing new, the field is now very, very rapidly advancing, and we should talk about it a lot. Because really, all signs point to IF being a dumb question, but WHEN we’ll start having sex with robots – that’s got legs. So to speak.

And so, it is a heavy burden, but, my dear and loyal 6 regular readers, I promise I will not stop thinking about robots and sex, and exposing myself to the public! In article format. Mostly. I just made the easiest promise of my life!

Reporting on Machine Sexy Science
If I had time, I could probably start another site and just aim technosnark exclusively at issues surrounding human/machine intimacy – www.humpyhumpysexbot.com would be awesome. Look, it’s available:

I’ll leave that URL treasure for someone else, but, as this already lengthy blah blah blah shows, clearly the issue is immense and hardly appropriate for a single article (maybe a graduate thesis?). Human/robot sexuality will advance and complicate and continue to fascinate, so there will be a lot more on this here at Anthrobotic.com. I’m probably going to need a new recurring feature….

Not sure what to call it…
Sadly, HumpyHumpySexBot probably isn’t going to make the cut.
Suggestions are welcome.

So, I’m going to take the dive and start addressing these things – if any of my 6 regular readers has any particular area of interest, please comment or contact – let me know. For now, here’s what I’m thinking about:

Gender Issues
In the long history of sexual desire for ideal-yet-not-real sex partners, toys, and apparatus, and even in these modern times (in the Western world), there aren’t yet a lot of man-shaped proto-sexbots out there, and that means something’s up. Granted, there are some (NSFW), but they aren’t really marketed at women, ya dig? That says something interesting – like what the hell is going on here with men? Or, as women seem more repulsed by such things, are they projecting their insecurities? Is humping inanimate objects necessarily negative? Is it objectification? Does anyone not toting a holy book or a degree in women’s studies even care?

What About Extreme Objectification?
This kinda goes with the above. As with current modular dolls, a sexual robot might be ordered piece by piece, with model #29 buttcheeks and size 5 boobies; a physically ideal partner customized and built to spec. There’s also some really interesting gender conflict here, because much more so than men, women don’t dig on being compartmentalized into buttcheeks and boobies. Of course, studies I’m too lazy to cite right now indicate that women also objectify men, just not so much on the physical. But, in practice, is it really all that harmful? Hell, I don’t know!

Is Robot Sex Cheating?
Pbbbbbb… I don’t know – is it?

Property & the Law
How exactly does owning your lover work? Is it criminally negligent to turn them off and put them in the closet? What about warranties and the EULA? What if they’re under 18? Assault with a deadly sexbot? And in all seriousness, in the longer term… murder?

Robot Sex and God
The top Google result for “sex with robots” is a religious screed on a site that’ll make you long for some GeoCities. Seriously, read it. It’s way more entertaining that anything I’ll ever write ever ever ever. It’s obvious that religious people will likely condemn sex with robots, and religious freaks might go much further than condemnation.

And, What if it’s Better?
What if both the physicality and the AI is really, really good? And honestly, once it comes to the deed, for the AI, how good does it really have to be? Faced with a nearly indistinguishable facsimile of an ideal, interested, aroused, and willing biological partner, will the average human fail to suspend disbelief? I can’t really speak for women, but I know a guy with a boner is not going to pull out his pocket Turing Test before getting down to business. Then there’s the question of whether or not a perfect partner is even desirable, and so on, and on, and on…

Going Mainstream
Okay, for now it’s easy to laugh at (and be creeped out by) devices such as the Real Dolls (NSFW), but that company and others like it could seriously end up as pioneering forces in the march toward creating convincingly realistic robotic lovers – and then the creepy & funny becomes the OH MY GOD what the hell, this is awesome, make more, make more – or, the OH NO it’s a nightmare kill it, kill it, kill it.

At the moment, only the most generous psychologist wouldn’t call doll humping creepy and dysfunctional. And for now, 99% of us might be repulsed, but despite our contemporary judgement and derision, things will change; dolls are already being roboticized, and probably sooner than we’re ready for, they’ll begin crossing into believability. So, these glibly dismissed companies currently making dolls for the socially retarded or otherwise dysfunctional, yeah – they could end up altering the course of human sexuality.

Finally, There’s the Robots. Themselves.
What if we get so damn good at making them, that one of them “wakes up?”

It’s kinda robotics’ and AI’s oldest philosophical question – probably because creating another sentient lifeform would be the craziest shit human beings have ever done. This short animation explores that particular issue, and while it begins as sort of a geek fembot fantasy wet dream, it quickly becomes sincerely emotional when a “defective” machine, the female above, begins arguing for its/her life. Even for the only mildly dorky, it might surprise you how compelling it is. Have a watch – then consider that you could very likely see such scenarios in your lifetime. But like, real ones, man. In all our arrogance, we should remember that we might one day have to consider their feelings as well.

Okay, Oh My God, Yessss, I’m About to Finish
All my adolescent BS aside, I think now is a really good time to put some effort into working these things out. Despite all our advancement and Freud and stuff, it’s clear that our understanding of human sexuality remains limited, and we should at least try to be prepared. Building AI teaches us a lot about human cognition, and it stands to reason that if we pay close attention to the issues surrounding sex with robots, we’ll learn a great deal about human-on-human sexuality as well. I guess we shall see. We shall see.

Also, I know there are like 37 other subtopics to address on this issue, so if you’ve got any suggestions please comment away. I’ll once again recommend Love & Sex with Robots, by David Levy. It’s an academic, yet accessible analysis of the issue. If you’re really interested in this stuff, you need to read it, son! I read it in a maternity ward in 2008 when my best friend’s wife was squeezing out a real human – because that’s how I roll.

Oh, and I know this piece contains a lot of supposition, a lot of “what if” and “could be” and “ohhhh, then what?” I usually prefer to avoid that sort of reaching and make fun of those who do it, but this is kind of a special subject, so cut me some slack on the abundance of hypotheticals, yeah?

Whoooo…
Well that was anything but a quickie.
I hope it was good for you.