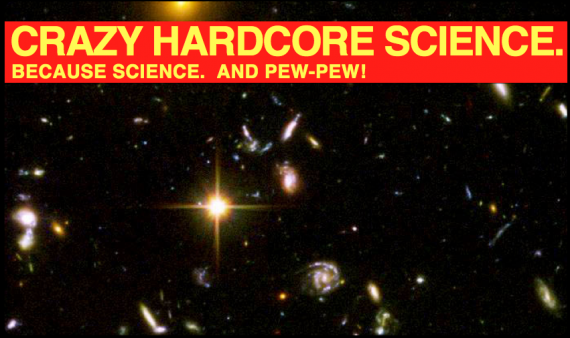 Pure Exploration
Humans need that. I don’t know what would happen if I suddenly quit life and just decided to walk to Russia, or become an auto mechanic, or pledge to live a life of nudity… I can kinda guess at the results, but I’m still curious about the details. It’s good to try – just because – just to know.

Pure Science
Some hardcore Euro-Scientists want to build the most powerful laser ever ever ever, fire it at the universe (aim that thing like… anywhere, yeah?), and then just, you know, see what happens. They’ve got some ideas and anticipatory notions of what this could prove or disprove, but they don’t really know. More likely than not, awesomeness and loads and loads of knowledge will result.

European research and development entities, despite their state-level financial crises, are still embracing pure science and pushing forward with bold, unprecedented projects – some just because they wanna learn new stuff, some purely utilitarian yet massive in scope and function. You’ve got CERN’s LHC, the proposed Thames Hub, and stuff like this – firing a huge goddamn laser at the universe just to see what happens.

So, props to the Euro-Sci people. Sometimes the only reason to do something is to find out what it’s like to do it. You might end up with some deep insight into the nature of reality or yourself or some nice secondary or tertiary benefits from the experience, or you might just end up learning that crazy idea A, B, or C is just that.

Or you might get to roll down the window of your reality and stick your head into another plane of existence!