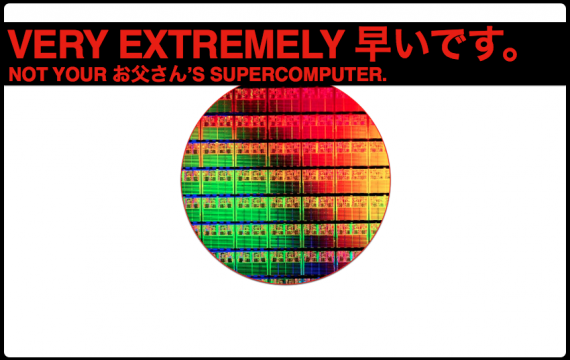 Covered this way back in June, when Fujitsu and RIKEN were all like: “Yeah, our new computer is at 8 flops now, that’s almost 4 times faster than the next best supercomputer – just saying.” At that time the next closest was a 2+flopper from China.

Oh, and a few days ago they were all like: “So, we decided to add another couple of flops, so it’s at 10 now, JSYK.” Criticize Kurzweil all you like when he raps about the exponential returns in technological advancement, but I’m pretty sure that 2³ = 8, and that’s like, you know, an exponentiation – which is totally a word.

For now, the next projected leap for the Fujitsu RIKEN machines will be up to 23 flops or so. No, that’s not exponential, but seriously, how far away can 100 flops be?

Of course the term “supercomputer” means a lot of different things depending on intended use and each machine’s particular task orientation and software array, and faster doesn’t always mean better – but it still means a lot.