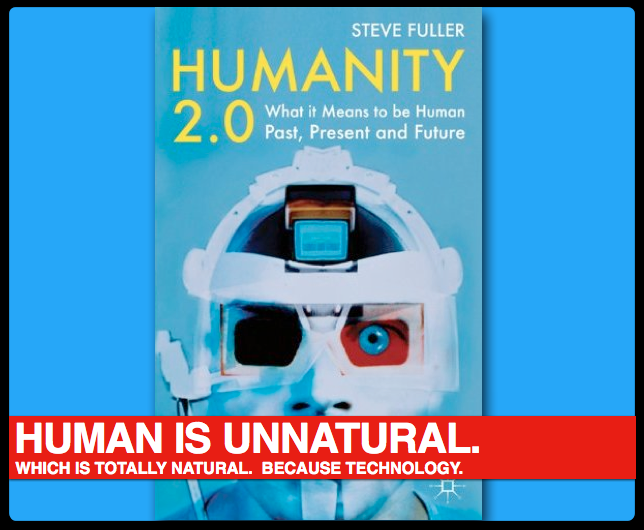 This is kind of related to my blah blah blah about cyborgs from a few days back. But kinda not. Though cyborgs are a step toward (during?) humanity’s next (self-directed) evolution.

The theme of the herein referenced article and book (AMAZON) is the very closely related concept of Humanity 2.0, which is, basically stated, a notion of comprehensive human upgrade at the paradigmatic level. Like Posthumanism. Or Transhumanism.

The Ongoing Nature of Nature
While cyborgs are real and among us, Humanity 2.0 is more of an abstract idea, a movement, an ideology, or a sort of… thought exercise. It’s very catchy, but the name can be somewhat deceiving. What I mean is, in the context of our perception of linear time, the march toward radically upgrading the human experience is not a “switch-on” process, it’s not sudden, it’s not merely a download away. It’s an ongoing-for-quite-a-while-now, subtle, and steadily accelerating merger.

…which Appears to Also be Accelerating Faster
Now, in epochal terms – the wider/longer point of view – human improvement has of late been ferociously breakneck. Have a look at human longevity statistics over time. See what I mean? In the context of all human history, the last few hundred years have effectively tripled average human lifespan in the developed world. The impact and potential of this profound statistical spike is amplified by the relative stability (in a non-epochal point of view) of the spike’s causal factors, i.e., the rapid advancement of our most fundamental and essential proclivity – the development and implementation of technology. (RELATED POST: The Good Old Days are a Myth)

Implications. Economics. Accessibility.
Anyway, even if Humanity 2.0 is only an idea, it’s super important to seriously discuss the implications now. Because, as these technologies evolve, who gets access? Who decides who gets access? Will the idea of Humanity 2.0 become intrinsically woven not into the fading economy of materials but the coming economy of ideas? Can an economy of ideas sustain laissez faire capitalism whilst banking on trickle-down benefits for the wage slaves oops I mean working class? Will there be proprietary and open-source options? And let’s not forget the most important issue of all, TECH SUPPORT!

Anyway, have a look at this interview with University of Warwick sociologist Steve Fuller. He’s got a very mature, measured, and comprehensive take on the whole Humanity 2.0 process/idea/projection/thought exercise thingy.

[VIA THE VAGUE GUARDIAN OBSERVER MERGER]