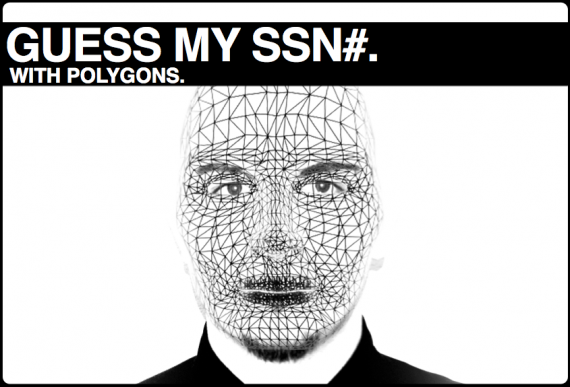 The New York Times reports that 50 bars in Chicago are using cameras jacked into facial recognition software that will profile a venue’s clientele and push status updates to a smartphone app called SceneTap.

So dude looks at app, surveys a locale, decides:
“Let’s not go there – the place is empty or there’s nothing but or not enough cougars or cops or guys or girls or furries or hipsters, whatev.”
Or something like that. I’ll swing back around to this, but first…

OKAY… Talking Laissez-Faire Personal Data Security
My dear friend Brad works in network security, and he and I often disagree about digital privacy – specifically, data we share on a network accessed by a healthy majority of all computers on earth – the internets! He sees a lot of opportunity for abuse and fraud – and it makes sense, the technology that allows said abuse and fraud advances so fast it’s almost impossible keep up with security measures. Almost. But yeah, I see his point – and I take it seriously, and I adjust my data sharing accordingly. But still, I think worrying too much about it is kinda like not leaving your home for fear of bad drivers – they’re out there, yeah, but what are the odds?

PRIVACY IS AS DOES…  Considering the Facebook Monster
The virtual world of Facebook is a lot more like real life than we realize, and we should self-monitor and think carefully about what we share. This is, or should be, completely obvious. If you voluntarily (stress on the VOLUNTARY) share your personal and perhaps sensitive info with a free (more stress on the FREE) online social network, then you alone are entirely responsible. Don’t want your info out there? Don’t put it out there.

I could be wrong (unlikely), but I think anyone who moans and complains about Facebook privacy has got to be partially brain damaged. It’s such a bizarre and contradictory narcissism couched in pre-2003 delusions of one having a secret internet life (the genesis of the Troll, perhaps?). We’re all kinds of eager to fill out forms describing our idealized external self image and post our most flattering photos, but then if by chance someone we’d prefer not to see our precious info does, we attack the medium of Facebook for being lax on privacy.

Hip yourself to it this way:
Would you walk down the street in “real” life with your address, DOB, SSN, phone number, full name, photos of you and a goat and whiskey, and a list of personal opinions and comments printed on your t-shirt? And if you did, and then you perchance across someone undesirable who notices and collects the information, would you get all pissed at the company who made the shirt? And did I mention the shirt was free? And you didn’t have to wear it? Okay, okay – enough. 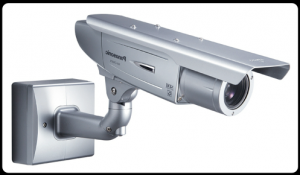 SO THEN… Bringing it Around to Face Privacy
Okay – for general online privacy, I sort of disagree with Brad based on probability (how likely it isn’t that someone nefarious is going to get/abuse my data) and a principle of self-reliance or self-responsibility (manage your public presence, yo – digital or actual). Otherwise stated, don’t be dumb online and the chances of trouble are slim.

But Faces?
Now, the above mentioned bars in Chicago are all opting in, and customers are choosing to frequent these places, and the facial recognition software isn’t tracking individuals, just trends across groups.

Still, I think this one’s really going to chafe for Brad. And this time, I kinda have to agree with what I think would be his position on the issue. Our faces are not something we can share selectively – well, unless we go all hijab on ourselves or something.

Here, have a read at this:

“Using off-the-shelf facial recognition software, researchers at Carnegie Mellon University were recently able to identify about a third of college students who had volunteered to be photographed for a study — just by comparing photos of those anonymous students to images publicly available on Facebook. By using other public information, the researchers also identified the interests and predicted partial Social Security numbers of some students.”

So Brad, network security for now – but what about some kinda startup that provides facial security? Perhaps a scrambler? Or a device that replaces the user’s face with, well… anyone else? Or rotates between various living (or not) heads of state? Then you find a way to keep the device from using unlicensed faces, and then you start a subsidiary that licenses faces! See, I know how capitalism stuff works. Or not. Those actually were semi-original ideas, but I was Steam-Engined-Timed by this dude’s real-time face substitution software.  Anyway… 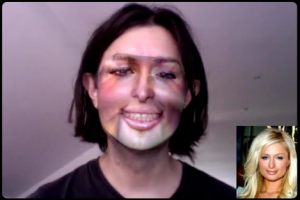 We Do Have to Face This
– Horrible cliches annoy real journalists! –
K, but really – this is a potentially creepy technology that we’ve gotta do a good job managing. Internet privacy is, for the most part, a self-maintainable responsibility. But not all people take it seriously, and as shown in the above quoted example, a little bit of information combined with a handful of photos tossed into a powerful probabilistic deductive algorithm can result in a serious breach of personal data security. And that’s just today’s technology. It’s very, very rapidly getting a lot better.

That’s what I’m really trying to say here with this rambling blah blah blah. Heed what Brad and his kind say, because just a few images combined with the right variables can expose you to malfeasance, yo. But don’t heed TOO much – even with magical advances in facial recognition software, paranoia is not yet warranted.

Remaining Virtually Realistic
– Tough not to dance when the hits just keep on coming! –
While we totally should, I think it’s going to be difficult for us humans to accept that our virtual lives are tied figuratively and literally to who we really are in meatspace – and we have to embrace the new responsibility of managing both. Either that or make the personal choice to go off-grid and ditch our networked electronics all kindsa BSG-style.

I’m hip to the facial recognition technology at work here – in principle – and I hope Chicagoans are able to better plan their nights out. But I also hope the digital security wranglers like my friend Brad keep an eye on this.

At this moment we’re not quite yet fighting a controlling oppressive fascist regime, so we can let a modicum of personal info float around in the world. In a relatively free society, those who really, really want to hide everything they’re doing (online or not) are usually doing something they probably shouldn’t be.

Jeffrey Dahmer would not have been on Facebook.
Namsayen?

[QUOTE AND ARTICLE VIA NYT]

THIS STUFF IS RELATED:
Addiction [?] To All Things Digital – Connected, The Movie; Skeptical, The Author
READ MORE

In Defense of Being an Always-On Human
READ MORE
Put Your Consciousness Online – LifeNaut Says You Can Begin Building a Mindfile Like, Now.
READ MORE 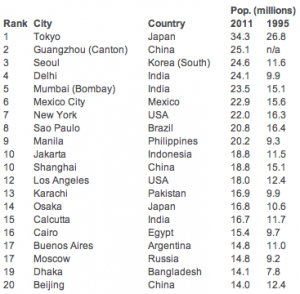