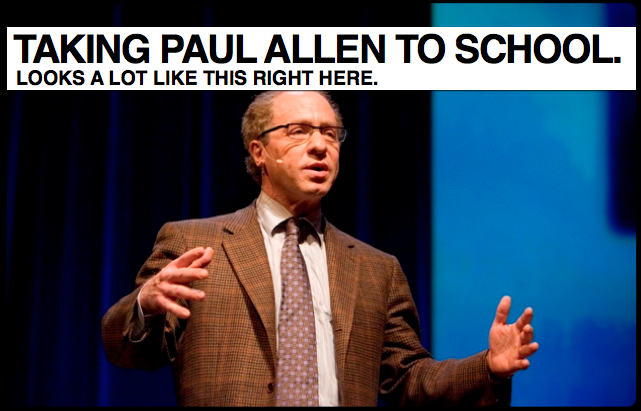 Ahhh, That’s Nice
And upon reading Kurzweil’s remarks, one gets the sense that Allen should feel lucky to even be mentioned in the same article. It’s a pretty diplomatic rebuttal from Kurzweil – but you get the feeling he’s holding back a significant level of, oh I don’t know… scathing intellectual contempt?

You know that feeling you get when someone you respect, who you know is intelligent and very good at what they do – when they open their mouth about something way outside their area of expertise and sound really foolish, and you suddenly feel like you just watched your neighbor’s dog drag its ass across the front lawn? In any case, my opinion is that Kurzweil was taking the high road in his response to Allen’s disparagingly cursory overview of the Technological Singularity (not to mention his weak logic), and that’s nice of him.

This Guy Does That and That Guy Does This
It brings to mind an excellent piece from Wired on the Intellectual Vs. the Engineer, by Timothy Ferris. Paul Allen knows business & marketing, and we should listen to what he says about that. But when it comes to all things Singularity, he’s an armchair intellectual who hasn’t actually done anything of note in the field. No one can really argue that Paul Allen isn’t a good businessperson or marketer, but I think it’s obvious who was the dorky programmer and who was the savvy businessman in the ‘Gates+Allen=Global Dominion Over PCs‘ equation.

Kurzweil, on the other hand, was making computers compose original music in 1965. So… who would you trust on the issue of machine intelligence?

That’s why I don’t run a website about cooking.
And Paul Allen should just make with fixing NBA 2011/2012.

BOOKS MENTIONED IN THIS POST:
Get your copy of
“The Singularity is Near: When Humans Transcend Biology,”
by Ray Kurzweil at Anthrobotic’s Amazon!