This week it appears that Kyocera is (allegedly) thriving in the UK printer market (paper, not 3D), and Toyota has decided that racin’ and jumpin’ and stuff is good for business after all. COME ONE, COME ALL! READ THE GODDAMN JTFF!

Anthrobotic began infecting the internets in February of 2011, and a solid year later, on 2012.02.12, the first JAPANESE TECHNOLOGY FROM THE FUTURE FRIDAY was published. The JTFF thereafter developed and systematized over a year of (kinda mostly) weekly posts, and the formula actually worked. The cited news and smartastic commentary thereon was never more than a few hours old, and though it was a gimmicky excuse to start a regular column, the JTFF turned out to have a decent measure of conceptual validity.

In May of 2013, the JTFF matriculated to AkihabaraNews.com, a fine URL that Anthrobotic’s founder was in the process of taking over. It was a natural move to a cool new home, one that kept it on-schedule and proper published every single Japanese Friday night without fail. And for a time, it was good.

On October 4, 2014, 73 AkihabaraNews JTFFs later, everything broke…or, more accurately, that everything had been broken finally came into focus, and the obvious dawned: raging perseverance can be dumb as hell. 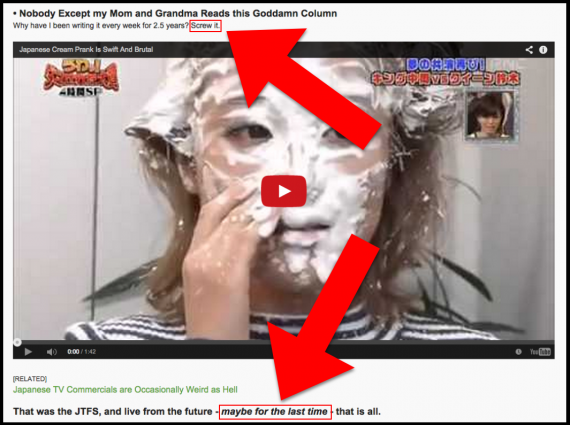 The JTFF had a good run at AkihabaraNews, and a lot of really decent Technosnark©®™ was spewn forth: anti-nuclear hippies were shamed with badass shards of logic, bullshit East-Asian economic/conflict theory was called bullshit, and link-baiting pseudojournalists were beaten with the dumbass stick. With neither restriction nor censor, the JTFF delivered quality, original commentary on underreported news and tech developments, and there actually were a handful of appreciative, regular readers.

But the column had gradually become a soapbox for an otherwise frustrated, disillusioned, and increasingly bitchy editor. The thrill was gone, and the free-form fun and heartfelt dorkiness had metastasized from a unique take on late-breaking J-tech news into a release valve for the author’s boiling frustration with the putrefying Institution of Journalism as a whole.

It could be suffered no more, and so – with a flourish of editorial privilege – AkihabaraNews was given a JTFF-ectomy.

Free cookies to those who dictionarylessly know what those pretentious-when-used-by-someone-not-French words mean, but you know what, screw the French..or, no wait – screw the denouementing!

To be sure, there is wisdom in knowing when to quit and knowing when something vestigial should be amputated and discarded like so many appendices, but…sometimes the greater wisdom is knowing that it’s just time to get your shit together and go home.

And so, 17 free Friday nights later, rising like an ultra-dorky Phoenix from the ashes of angry meh, viva the goddamn JTFF, yo.

Welcome Back to Anthrobotic’s Japanese Technology from the Future Friday

Well this is a sign of the times right here…not that a division of Japanese tech giant Kyocera is doing well in the UK, but that the JTFF is actually referencing a paid-placement advertorial (hence the hipstery ‘¿’ and whatev, I do what I want). For those not hip to contemporary journalism’s payola analog, this means that Kyocera paid for the article; rather than buying an ad on the site, they bought the author (served, of course, with a glaze of disclaiming euphemism). But okay, to be fair it is interesting news that a Japanese company is doing well in the Western World’s printer business – less because of any other reason, more because of, if accurate, holy shit there’s an actually growing consumer and business-level (paper-not-3D) printer market in the Western world? Well, paid-reportedly so, but take this news with the grain of journalistic salt it deserves. And damn, maybe Anthrobotic is way off with that whole Terminal Anachronism POV (we’re not though).
[£85 MILLION BUSINESS TRIPLES REVENUE – LONDON LOVES BUSINESS]

The World Rally Championship is a 30-some-year-old multi-stage, multi-venue auto racing competition to see who can go fastest in heavily modded, bespoilered, stickered-up rice rockets capable of vrooming on gravel roads and doing jumps and stuff. Yes, that’s an oversimplification, but also not. The Japan Times says this is part of Japanese automakers’ return to frivolity after the 2008 financial crisis led them to decide that it was bad PR to go racin’ even when racin’ can’t possibly cost all that much (Honda got back into the Dakar Rally in the past few years, too). Could be wrong, but one imagines that the cost of producing a single TV ad campaign could probably fund a racing team for like 6 months or something…but actually one doesn’t know shit about racing so maybe not. Podium appearances do indeed fuel both automotive tech development and brand awareness/prestige, so like, you go Toyota girl.
[TOYOTA PLANS RETURN TO WORLD RALLY – JAPAN TIMES]

Alright, just two today. It’s good to be back.

それは今日のJTFFでした。
Live from the future, that is all!