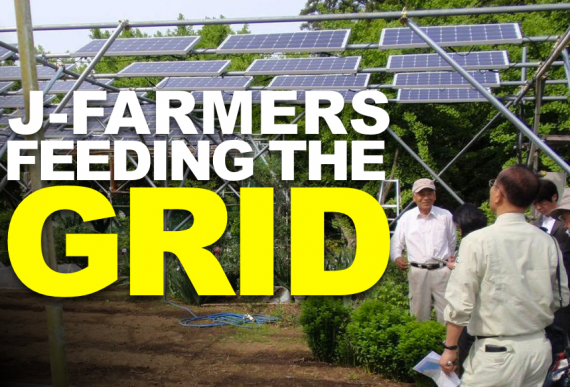 Farming might be dying, but the farms still physically exist, and one in particular, located in Chiba Prefecture, the eastern edge of the Tokyo Metro area, has put part of their plot to double-use by installing a solar array above their veggie operation.

Japanese farmers do not have it very easy. Naturally, it’s a lot of really hard work, much of which, even in 2014, is hardcore manual labor; the bulk of Japanese farming remains only partially mechanized (if at all). Hours are long. Profit margins are slim. With the possible exception of personal pride, the upsides are minimal, and effectively nothing looks to be getting better.

Here in Japan, as is the case in the United States, for example, although farming and ranching are generally considered honorable professions, understandably, almost nobody wants to do them. Moreover, the fact of the matter is that Japanese agriculture is massively propped up by government support and aggressively protective trade policies, i.e., in an open market, Japanese farmers, already an extreme minority, would vanish.

Oh, and another thing:
According to the Japanese Ministry of Agriculture, Forestry, and Fisheries (PDF – Japanese/日本語), approximately 60% of those actively farming here in Japan are over 65 years old, and only 10% are under 50. Push out 30 years, and even with continued subsidies and such, farmers are going to literally vanish.

In the interim, that all might be good news for the Japanese powered exoskeleton and assistive robotics industries, and it will provide years of research material for superdorky techno-sociologists fascinated by an aging society’s impending cyborgification, but it signals a fundamental change in the fabric of the Japanese self-image – whether justified or, much more realistically, not.

BUT HEY, Put the Rice and Tubers Aside – Selling Kilowatts is Much More Profitable than KiloVeggies!

Farming might be dying, but the farms still physically exist, and one in particular, located in Chiba Prefecture, the eastern edge of the Tokyo Metro area, has put part of their plot to double-use by installing a solar array above their veggie operation. In a single year, they sold ¥1.7 million (~$16,700) worth of electricity back to the grid.

According to the cited report, another 68 farms have signed on to participate in the government-backed conversions and begin diversifying their income streams. If the Chiba farm’s success can be duplicated, it’s great news for a lot of retired or near-retirement farmers: grandpa will soon be able to ease up on the large-scale foodstuffs production, lower the backbreaking workload, and sell some electricity.

Participants are required to continue their agricultural work, but eventually (and necessarily; see above demo stats) that could be reduced to just like, you know, doing some light gardening. Ultimately, TEPCO, the utility that buys the electricity, probably doesn’t care too much about the rest of the land use.

An Evolution, of Sorts

Suffice it to say, it’s a nice bit of silver lining around all the dread, hand wringing, and hype surrounding the Aging Society Problem and the profoundly polarizing, de-subsidizing Trans-Pacific Partnership (TPP). The hard realities are that Japanese farmers will soon die off, and TPP or something like it is probably an inevitability. It would be nice, then, if clean, renewable, sustainable energy can help Japan with the difficult hoeing ahead.

For more details, particulars, figures, movers and players, jump through to this lengthy but worthwhile report from Bloomberg.

[THIS ARTICLE ORIGINALLY APPEARED AT AKIHABARANEWS.COM]