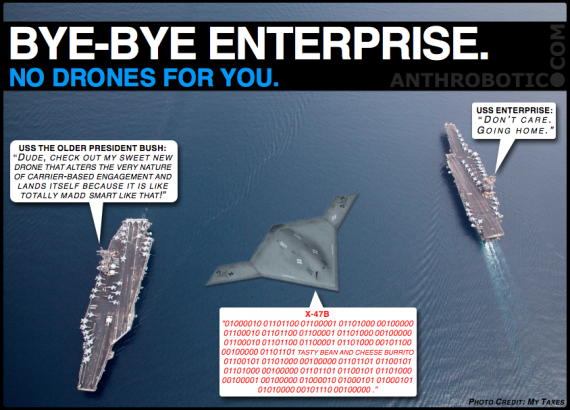 The warboat USS Enterprise (CVN-65), Ret., the world’s first fission-powered aircraft carrier, has sailed home for the last time. The boat was designed and built with 8 nuclear reactors, remains the longest carrier every made, and through regular action from 1961 to 2012 completed more than 400,000 aircraft landings. In tribute to this groundbreaking piece of human technological achievement, Gizmodo’s produced a very nice writeup.

And yeah – 8 reactors, yo – but why? Well, there’s an amusing military urban legend that engineers weren’t sure what the reactor’s actual propulsive power would be, so they were all like  “Well, stuff in 8 of them and let’s see what this baby can do!”  …and then you get the self-massaging story of a newly minted superpower that’s all like:  “We’re so awesome at technology that we make our superboat 4-8 times more powerful than necessary just because, you know, we can. So recognize! And you commie bastards stay the hell away from Cuba!“  Buuut, according to Anthrobotic’s veteran U.S. Navy sources (Yep. No, no really!), the Enterprise having 8 reactors was due simply to then contemporary size/power ratios – and of course we got better at that, so modern craft only have 1 or occasionally 2.

Drones are everywhere these days, but the U.S. Navy’s maybe-a-robot-maybe-not Northrup Grumman X-47B is the only one doing ground-based steam catapult launches, tooling around on the deck of the USS Harry S. Truman (CVn-75), and preparing for next year’s first carrier-based drone launch. The venerable Enterprise will never get any of that action, but if successful the unmanned stealth drone and/or it’s descendants will likely get intimate with several of the U.S. Navy’s 11 active and 2 under-construction/pending carriers. Drones like the X-47B can extend the reach of carriers by hundreds of miles, provide greater precision in assessing and engaging targets, and very importantly, look totally badass and futery.

Wired’s Danger Room, despite their article’s shock & awe title (Navy Preps Killer Drone, seriously guys?) and arguably inaccurate use of the word robot throughout the piece, has put together an otherwise informative and decent piece on the X-47B.

Oh, by the way, the original test platform for the X-47B, the X-47A, first flew in 2003 – nine years ago. Considering advances in design-to-test capability and simulation speed that’re hypercharged by increasingly powerful computational technologies, at this point we kind of have to assume that They are currently testing carbon nanotube semi-organic teleporting sub-space transdimensional aircraft that fire mind bullets. Just sayin.

What About a Better Use for Human SuperTech?

Now, Anthrobotic totally digs on the hardcore technological capability represented by carriers and what they carry, and we abhor hippies as much as any responsible person should, but one kinda has to wonder: We are a species capable of creating:

2. Nuclear-powered horizontal skyscrapers capable of shlepping 100
war-fighting aircraft and a crew of 3,500 anywhere on the planet…

So why is it that our species isn’t capable of like, you know, not needing these things?

Let’s all grow up and just build a goddamn spaceship instead. 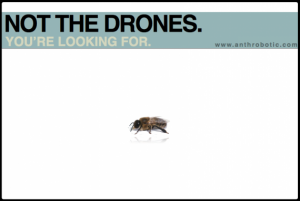 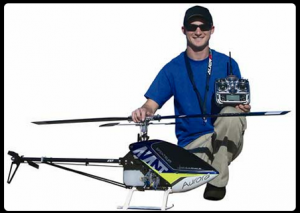 WarBot Update: What to Call the Drones Now that They’re here at Home – Suggestions?
READ MORE