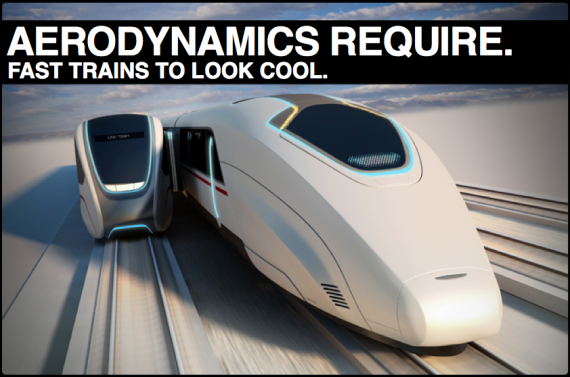 High-Speed Rail is a Good Thing
First – no, it almost never makes money. Why should it? The main points of contention – cost of construction and upkeep – always frustrate and baffle me. Municipal roadways and the single largest public works project in like, you know, human history – the American Interstate Highway System – certainly don’t make any money on the whole. But it’s transportation, it allows for the movement of goods and services and people, and we need that – we recognize transportation as vital, so we put madd tax dollars toward such.

The East and West coasts of my country could use some high-speed rail. Oh, and California should hurry up and make with a route to Vegas, too.
So, subsidize, man! Just saying.

I’ll also take this opportunity to express that the excess of profoundly ambitious British transportation projects continues to enhance my annoyance at the flaccid state of American ingenuity in developing and modernizing human travel.

Docking the Station Whilst Going Fast
Anyway, to get the concept, imaging a fleet of high-speed trains that never slow down or make station stops during operation. They’re just on loop passing near major population hubs or points of interest. At each of the points, “stations,” if you must, a sort of tram pulls up to the high-speed vehicle on parallel tracks, docks, doors open, and at 100+mph you step through a sealed portal on to your train – door closes, take your seat, go rapidly and comfortably to where you’re going – then reverse the process near your stop – the train keeps moving. The benefits of such a system are obvious, and if you want to know lots more have a look at Pristmangoode’s website.

This super-tech concept is inspiring, really. For anyone who’s not had the pleasure of high-speed rail travel, well, have yourself the pleasure. You’ll have to go abroad, though, because such opportunities in the U.S. are, well…  Not so much. As much as I love you, I’m looking at you, AMTRAK. Your Acela Express goes about 75mph on average. I know it’s not your fault. But still. Meh.

Now Japan – they’re getting it right.
And so, for now, I present a brief clip I took a few years back:
The Japanese countryside at 180mph

That clip there was taken out the window of one of Japan’s unfortunately colored, and much-sexier-in-person Shinkansen trains. Also referred to, somewhat inexplicably, as “bullet trains.” I suppose that’s better than “suppository trains.”

British Guy Knows – More Trains Please
Props to Priestman and his team – check out his work after the jump. And support high-speed rail. The trains are superfast, supersafe, super-tech tubes of goods and people getting places and getting stuff done. The development and construction and operation of high speed rail doesn’t have to in and of itself be a for-profit endeavor. Nope. But it can directly stimulate economic development, decrease the environmental impact of excessive short-distance air travel, lead to secondary technological progress, and generally increase human mobility,

Maybe American politicians need to get themselves to Asia or Europe and have a decent train ride. That combined with the inevitable embarrassment at having to ask the French or Japanese for help making fast trains should shame them into action.

They’ll get it then.
If they have passports.

BOOKS RELATED TO THIS POST:
“The Railway Journey: The Industrialization of Space & Time”
by Wolfgang Schivelbusch
Available at Anthrobotic’s Amazon!