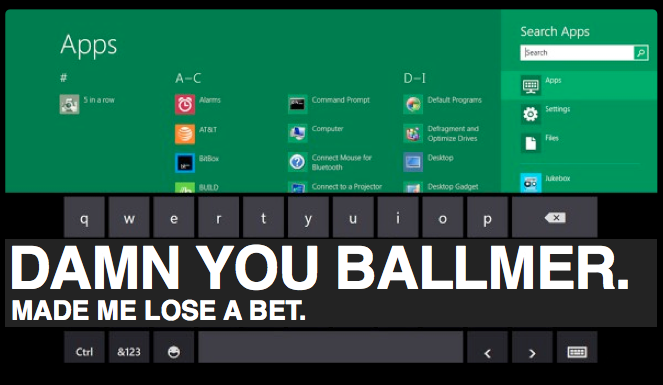 So yeah, I told my good friend Brad some years ago that Windows 7 would be Microsoft’s last proper operating system, that they would go to the cloud next – a sort of Chromebook-like experience with basic nuts & bolts OS on board, but with most vital/useful things happening in an always-on cloud-based interface/OS-sorta-thingy.

Gamble
Well, actually I bet Brad that this would be the case. Can’t remember exactly what the wager was, but I’m pretty sure it was something I don’t have to give. I had great confidence [OS COMPARISON VIDEO AND LINKS AFTER THE BREAK].

But Maybe This Bet is a Draw!
While as of yet unreleased to the public, Windows 8 is already being praised for its bare-bones simplicity and it’s speed and new take on the tablet ecosystem and potential alacrity towards app development. And most interestingly, Microsoft is getting all kinds of props for actually taking a risk and innovating in a sort of Google-esque leap of faith into seriously uncharted territory – that being the merger proper of mobile and desktop OS architecture (something Apple’s taking kid steps toward with Lion and OS5).

Okay, but back to the bet – aside from Office stuff and a few other things, what will actual customers do with Windows 8 that isn’t in some way intrinsically linked to the cloud? Is its operating software running from the cloud? No, I lost there. But is its usefulness and ultimate make-or-breakness intrinsically tied to accessing cloud-based information and services? One suspects the answer is yes.

Retroactive Stepchild Rising
Anyway, perhaps Microsoft is tired of hearing about Apple’s now huge stack of cash (lots and lots of billions more than MS). Maybe Windows 8 will give new vitality to Microsoft’s desktop presence and become the first truly parallel experience between the static office and the mobile phone. And maybe, just maybe – Microsoft can finally be forgiven for Windows Mobile.

[HERE ARE SOME ARTICLES VIA GIZMODO & VIA WIRED]